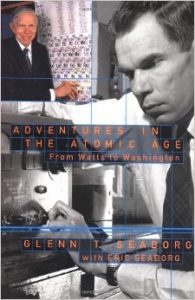 Adventures in the Atomic Age

Dr. Glenn Theodore Seaborg was co-recipient of the 1951 Nobel Prize in Chemistry for his transuranium element research. He was a co-discoverer of plutonium and heavier elements through element 102. Dr. Seaborg was responsible for the actinide concept of heavy element electronic structure (which he felt to be his greatest scientific contribution). The element seaborgium was named in his honor. In addition to numerous other accomplishments, Glenn Seaborg directed nuclear chemical research at the Lawrence Radiation Laboratory, served on the Atomic Energy Commission’s General Advisory Committee and was an AEC Chairman, was Chancellor of the University of California at Berkeley, was a member of the President’s Science Advisory Committee, and headed plutonium research for the Manhattan Project.

Dr. Seaborg’s autobiography, published posthumously, relates the development of nuclear science and policy and science education. Seaborg takes the reader through his life, from his beginnings in a Michigan company town, to Berkeley and research on transuranium elements and university administration, to Chicago and the Manhattan Project, to Washington and nuclear policy, and to a host of places in between.

The autobiography closes with a Letter to a Young Scientist, in which Seaborg eoncourages students to consider pursuing careers in science. Foremost in the letter is the concept that success in science is more a matter of hard work than of intelligence. Eric Seaborg follows his father’s memoir with a brief synopsis of Seaborg’s final days.

The text is conversational rather than technical in content or tone, yet it is highly educational. This is no dry recitation of events; here you witness exciting events and meet interesting people through Seaborg’s eyes. He is very generous, perhaps diplomatic, in his assessments of others. I believe he felt his tone regarding his own work to be modest, but some readers may be put off by his affectations or by his stated reasons for relating stories versus apparent true intentions (e.g., he changed his name from ‘Glen’ to ‘Glenn’ because he thought it looked better; statements about not mentioning a discovery to set the record straight or because he wanted credit while seeming to desire exactly that). The book was fascinating to me, primarily for the way Seaborg brought history to life. His memoirs are balanced and interesting throughout. Of course, his perspectives on the Manhattan Project are fascinating, but his enthusiasm for isotopic qualitative analysis, dismay with the state of US education, and consideration of American energy policies are equally engrossing. When I read the book it was entertaining and interesting; I’ll re-read it and keep it close at hand because it contains useful explanations of chemical principles and valuable historical reference material.

What Readers Will Find

What Readers Will Not Find