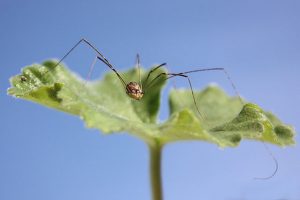 I’ve always kind of liked spiders. I don’t chase the less poisonous ones out of the house and enjoy watching the webs of garden spiders. That doesn’t mean I like touching them. My eight-legged neighbors are fine when they keep to themselves. One exception has always been the daddy longlegs spider. They seem to be everywhere and are quite harmless. I’ll let one of those walk across my hand.

Over the years, I’ve learned that much of what I thought was true about daddy long legs was incorrect. They are not the most venomous spiders. They don’t build webs. I knew there were multiple types of daddy longlegs, but I thought they were just variations on a theme. It turns out some are not spiders at all and belong to their own class of Arachnida called Opilionids. The other type of daddy longlegs is a spider called Pholcidae. They do build webs, can bite through our skin and are weakly venomous.

I can add another thing I didn’t know about Opilionid daddy longlegs. I did know they only have two eyes. What I didn’t know was they used to have another set of eyes. Scientists at Manchester University studied a 305-million-year-old fossilized and found and extra set of lateral eyes on the body. They studied modern opilionid embryos for the gene responsible for eye growth and found evidence of now-lost lateral eyes.

Now I wonder what pressures during the evolution of the opilionid occurred to lose the extra eyes.