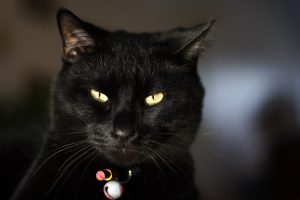 As long as there is good air circulation, dry ice smoke should be safe for use around pets and kids. (photo: Rosana Prada)e

Halloween parties are the best! There are cool costumes, Halloween party beverages and spooky fog. Have you ever thought about the safety of the fog? Here’s a question from a reader that you may be wondering about, too:

“… I just have one quick question that I can’t seem to find the answer to anywhere. My husband and I will be throwing a small party/get-together around Halloween and we are planning on using a Fog Machine that using Dry Ice. We have a Beagle. We want to make sure that this fog machine would not cause any issues with our dog being that she isn’t far from the ground, hehe.”

My reply: It’s true that there will be a higher concentration of carbon dioxide closer to the ground, but as long as there is air circulation in the room, it shouldn’t pose a risk for your dog. If she will be present during the party, you might want to be sure she can exit the room with the fog machine at will. I don’t think it’s likely she will nap during the party where all the activity is taking place, but you might want to discourage her from sleeping on the floor near the machine. If she seems sleepy or irritable, I’d probably relocate her to a different room.

Dry ice sublimates to become carbon dioxide. The cool carbon dioxide sinks to the floor of the room, where it eventually mixes with the air. To some extent, the carbon dioxide will displace the warmer air, but people moving around will mix the fog into the air fairly quickly. Unless you are flooding a sealed room with carbon dioxide or using a whole lot of dry ice, the risk from the increased concentration of the gas is slight. It’s a good idea to keep a watch on pets or small children, since they would be breathing a higher concentration of the gas (i.e., lower percentage of oxygen) than adults. Also, people with respiratory problems may have less tolerance to the lower oxygen concentration.

Generally speaking, water, dry ice, and liquid nitrogen fog are all very safe. How do you know if there is too little oxygen in the air? The usual tip-offs would be headache, feeling sleepy, nausea, and dizziness. If someone at a party with dry ice or liquid nitrogen fog experiences these symptoms, remove him or her to an area with fresh air. You may want to increase the air circulation for everyone else, too, or stop making fog for a while, just to be safe.

As you can see, I perform dry ice projects with my pets in the room. Where you would run into trouble would be a situation where the room is filled with fog. In that case, use a fan to make sure the carbon dioxide concentration doesn’t get too high near the floor.