Coulomb force is the force of either attraction or repulsion between two charged bodies. The force is related to the magnitude and charge on the two bodies and the distance between them by Coulomb’s Law:

where
q1 and q2 is the amount of charge in Coulombs
r is the distance in meters between the charges
k is the Coulomb’s Law constant = 8.99×109 N•m2/C2

This Coulomb force example problem shows how to use this equation to find the number of electrons transferred between two bodies to generate a set amount of force over a short distance.

Example Problem:
Two neutrally charged bodies are separated by 1 cm. Electrons are removed from one body and placed on the second body until a force of 1×10-6 N is generated between them. How many electrons were transferred between the bodies?

First, draw a diagram of the problem. 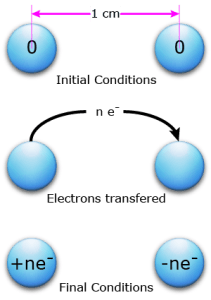 Start with the Coulomb’s Law equation.

As an electron is transferred from body 1 to body 2, body 1 becomes positive and body two becomes negative by the charge of one electron. Once the final desired force is reached, n electrons have been transferred.

We want the number of electrons, so solve the equation for n.

Substitute in the known values. Remember to convert 1 cm to 0.01 m to keep the units consistent.

Answer:
6.59×108 electrons were transferred between the two bodies to produce an attractive force of 1×10-6 Newtons.