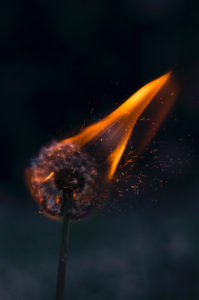 A dandelion burns in colors, including violet, blue, red, orange, and yellow. (Henry Be)

Back in 2013, a photo of a dandelion burning in a rainbow of colors went viral on the internet. The original photograph was taken by Gregory Gomer. That picture looks like what you’d expect. It’s a dandelion, engulfed in flame, pretty much just orange. Clearly, the viral image had been edited using Photoshop or a similar program. But, that doesn’t mean dandelions and other flowers don’t produce beautiful colors when burned!

How to See All the Colors in Burning Flowers

Dandelions and other flowers are colorful because they contain plant pigments called anthocyanins. Anthocyanins help flowers attract the best pollinators and warn pests of toxicity. They are natural pH indicators, which means they change color in response to changes in acidity or alkalinity. While burning a flower may help a scientist identify the molecules in its petals, the human eye usually doesn’t perceive a lot of color.

Yet, colors are there. They result mainly from incandescence, so the flame color is related to the temperature of the portion of the flame. In incandescence, red indicates a relatively cool flame, orange and yellow are hotter, blue and white are hottest. The chemistry of the flower comes into play, much like a flame test. Sodium produces a yellow flame. Violet may be produced by potassium. 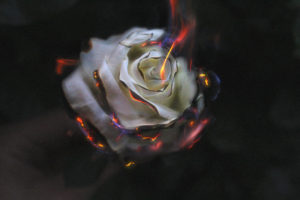 So, how do you see all the colors? First, take a photograph. It’s best if you photograph a burning flower in dim light so the flame doesn’t have to compete with all of the other light and color around it. Flames are bright, so go for a either a short exposure or else a longer exposure with a higher ISO number (which is how I photograph chemically colored flames). If you just snap any old picture with a camera, you’ll get a bright, washed-out flame! Smart phones are great for taking these photos because they automatically adjust to light levels and often do HDR (high dynamic range) processing.

Using Photoshop can be cheating, if you actually play with the colors. However, if you increase the contrast and the saturation, you’re just making the colors that are already there brighter. Do dandelions burn in colors? Yes. So do roses, daisies, and pretty much any other flower you set alight.