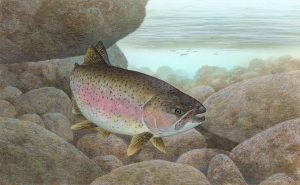 Norwegian scientists have found you don’t want to tease rainbow trout by withholding treats. They conditioned the fish to expect a shrimp treat when they see a visual light cue. They then paired up the fish with a large difference in size. When the researchers withheld the snack, the fish turned mean and began to fight each other.

They also found the smaller trout would get frustrated enough to take on the larger fish. Normally, smaller fish will give only token resistance or flee immediately when a larger fish gets aggressive. When both fish got the treat, the big fish would threaten and drive off the little fish. When the light would flash and no treat arrived, things changed. The fights became more intense and the little fish were more likely to fight back. They would fight until one gave up. In two of the eleven cases, the small fish became the socially dominant fish in the tank. They also found, the smaller the fish, the more aggressive they became.

What’s the point of teasing fish? The researchers are attempting to connect a particular behavior to brain chemistry. Many animals become violent when they don’t get what they want. This study shows fish are no different. These fish showed increases in serotonin in a part of their brain when the expected treat is withheld. Serotonin is a neurotransmitter generally associated with feeling happy or relaxed. This increase did not occur when the fish got their expected treat. Is there a link between serotonin levels and aggression? Further studies may show.