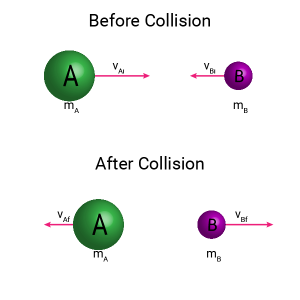 This illustration shows a generic elastic collision between two masses A and B. The variables involved are

If the initial conditions are known, the total momentum of the system can be expressed as

The kinetic energy of the system is

These two equations can be solved for the final velocities as

If you’d like to see how to get to these equations, see Elastic Collision of Two Masses – It Can Be Shown Exercise for a step by step solution.

First, visualize the problem. This illustration shows what we know of the conditions. 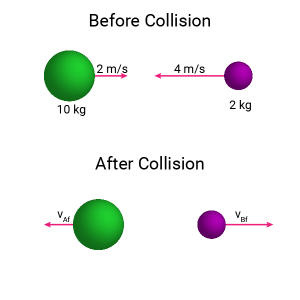 Two masses approach each other and collide elastically. Find the final velocities of each mass.

The second step is to set your reference. Velocity is a vector quantity and we need to distinguish the direction of the velocity vectors. I’m going to choose from left to right as the “positive” direction. Any velocity moving from right to left will then contain a negative value.

Next, identify the known variables. We know the following:

Now we need to find VAf and VBf. Use the equations from above. Let’s start with VAf.

Plug in our known values.

The final velocity of the larger mass is zero. The collision completely stopped this mass.

Plug in our known values

The second, smaller mass shoots off to the right (positive sign on the answer) at 6 m/s while the first, larger mass is stopped dead in space by the elastic collision.