This worked constant acceleration example problem will show how to use these three equations of motion to find details about the position, velocity and acceleration of a breaking vehicle.

Example Problem:
A motorist is speeding along at 120 km/hr when he sees a squirrel on the road 200 meters in front of him. He tries to stop, but it takes 12 seconds for his car to stop.
(a) What is the acceleration of the car? (assume acceleration was constant)
(b) Does the squirrel survive?
(c) How fast was the car moving at 100 meters?

Solution:
This shows the conditions of the vehicle at the beginning (t = 0 s) and when the car has come to a stop (v = 0 km/hr) 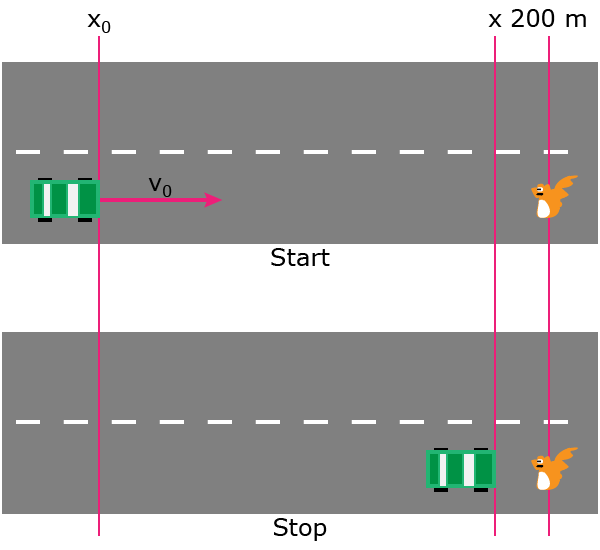 Initial and Final conditions of the breaking car example problem. Note: distances are not to scale. I know squirrels aren’t that big–or brave enough to just stand in one spot while a car heads towards them.

Part a) Find the acceleration.
Use Equation 2 from above.

Use t = 12 seconds and v0 = 120 km/hr. First, notice the stopping time is in seconds, but the velocity is per hour. We will also need the distance to be in meters, so convert the velocity to m/s:

The car is stopped at the end, so the final velocity is equal to zero.

Plug in the acceleration from part a) and the initial conditions.

The distance the vehicle took to stop was less than 200 m, so the squirrel did survive the encounter…barely.

Part c) What was the velocity at 100 meters?
Use equation 3 from above for this part.