Example Problem:
A block of weight w is suspended from a rope tied to two other ropes at point O. One rope is horizontally attached to a wall and the other is fastened to the ceiling. The angle between ceiling and the rope is 60°. What are the tensions in each of the ropes? Assume the weights of the ropes and the knot are negligible. If the weight of the block is 100 N, what is the tension in the ceiling rope?

This illustration shows the arrangement described in the problem. 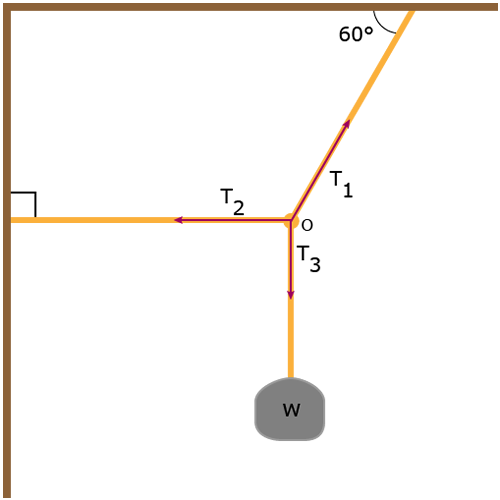 All of the tension forces act on the knot at point O. The variables have been defined as:
T1 = tension in ceiling rope
T2 = tension in wall rope
T3 = tension in block rope 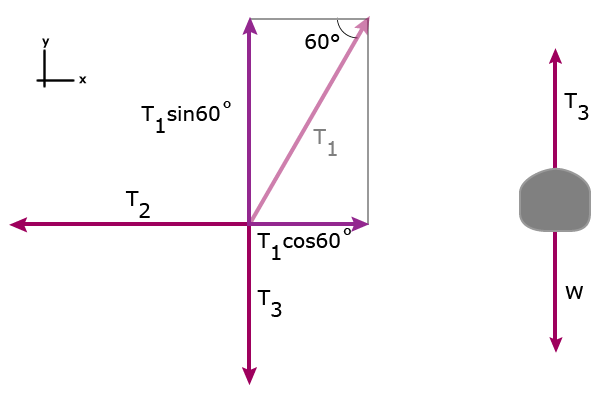 In the x-direction: there are no forces acting on the block so

For the y-direction, T3 is pulling the block up in the positive direction while the weight w pulls the block down in the negative direction. Since the block is stationary (at equilibrium), the total of these two forces is equal to zero.

Since both of these equations are equal to the same thing, they must be equal to each other.

Now we have the tension in the first of our ropes. Now, let’s find the tensions in the other two ropes. Note in the illustration how the ceiling rope’s force is broken into its horizontal and vertical components. This will make it easier to add up all our forces along our coordinate system.

Again, the knot is stationary and is in equilibrium so the sum of the forces equals zero.

We know T3 is equal to w from earlier. This equation becomes:

Now we know all the tensions in the ropes.

The second part of the problem gave a value of w equal to 100 N. Substitute this value into the tensions to get:

The key to this type of problem is to isolate your systems and locate all the forces acting on individual parts. Since the system is in equilibrium, the sum of all these forces will be equal to zero.