The full moon really can appear blue, but the usual meaning of a “blue moon” is simply the second full moon in a month. (Kevin Quezada)

The full moon has many names. Some names are based on the Moon’s appearance, while other signify the meaning of a full moon during a certain month, season, or astronomical event. Here is a list of full moon names and what they mean.

Sometimes the Moon looks different from usual. This can be because of its distance from Earth, dust or humidity in the atmosphere, or an interaction between the Earth, Moon, and Sun. Here are some common full moon names for these events:

Blue Moon: Any time a second full moon occurs within a month, it’s called a blue moon. However, this type of blue moon may or may not look blue! Blue-colored moons do occur, but they are rare. Smoke or dust in the air can make the moon appear blue. In 1883, many people reported seeing a blue moon following the eruption of Krakatoa.

Blood Moon: The blood moon is the name given to a full moon during a total lunar eclipse. During a lunar eclipse, the Earth blocks the light of the Sun, but some light is scattered around the Moon. The scattered light makes the Moon appear red, orange, copper, or yellow. Light scattering is the reason the Sun changes colors at sunset.

Super Moon: The super moon is the name of the full moon at perigee. This is when the Earth and the Moon are closest to each other. The super moon really does appear larger and brighter than a regular full moon.

Micro Moon: A micro moon is the opposite of a super moon. At apogee, the Moon is at its most distant point from the Earth. A micro moon appears smaller and dimmer than a regular full moon.

Throughout history, people have given the full moon a special name corresponding to a significant event during that time of the year. There are multiple names for full moons corresponding to months or seasons: 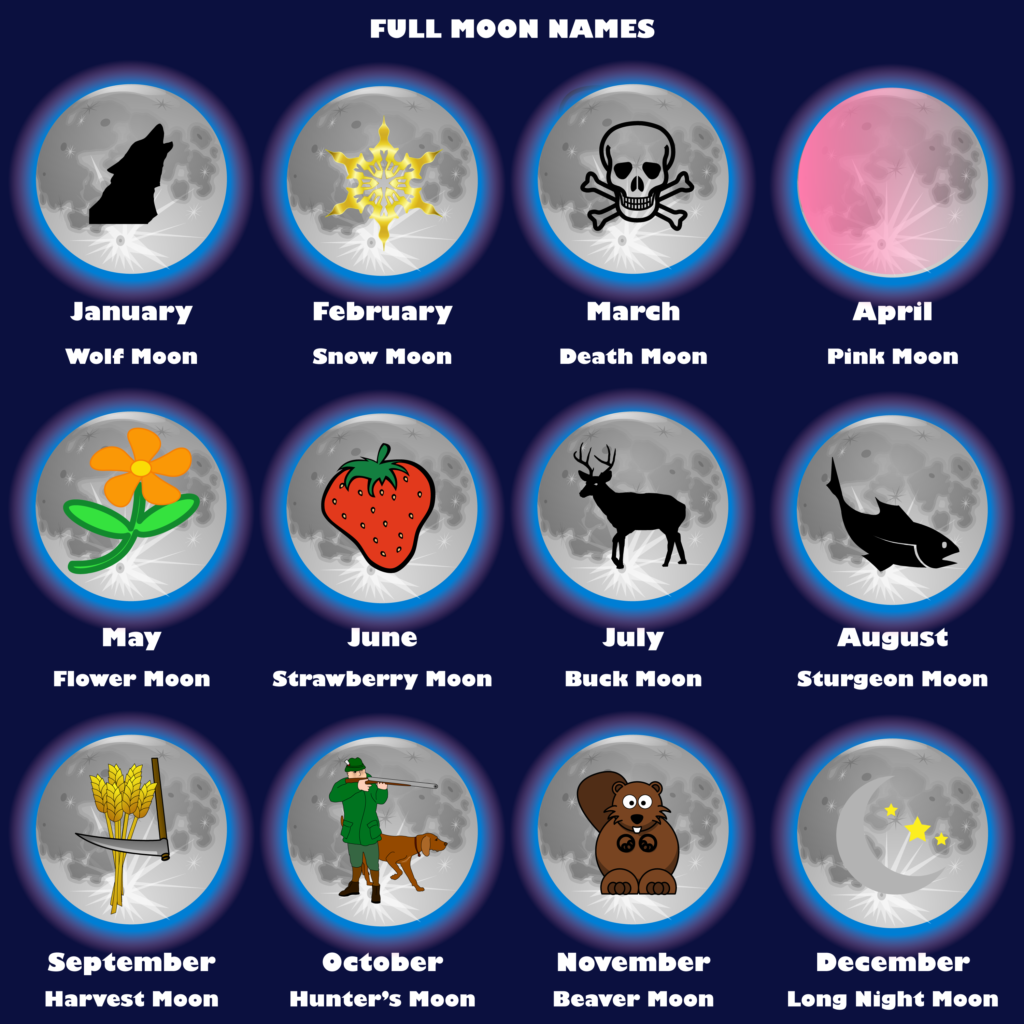 These are common full moon names for each calendar month.

Traditional names for the full moon in January reflect the cold, dark, and lack of food (but not hungry predators) in winter.

Oh, you thought winter in January was bad? February is when it gets really snowy and you’re likely to run through your food reserves.

The March full moon is the last full moon of winter. The full moon names reflect the first signs of spring.

April full moon names are all about spring.

More signs of spring appear in May, farm animals have their young, plus it’s time to get gardening underway.

In July, bucks (male deer) start growing a new set of antlers. Summer thunderstorms kick into gear. In the mid-latitudes, you can get harvest hay.

In North America, sturgeon are abundant in August. Grain and corn are ripening, but aren’t quite ready for harvest.

The autumnal equinox occurs in September. After this date, nights in in the Northern Hemisphere are longer than days, but harvesting can continue under the light of the full moon.

Harvesting draws to a close, but game is plentiful and easier to spot in cleared fields. Nomadic people often moved from summer to winter locations at this time.

One name for the November full moon is obvious, but the origins of the other are unclear. It could be November was the best time to trap beaver or perhaps it was when beavers actively built dams.

The winter solstice occurs in December, marking the longest night of the year.

These names come from Native American and European tradition. Other parts of the world have other full moon names. What names have you heard?

Improve your familiarity with the full moon names by solving this fun word search puzzle.