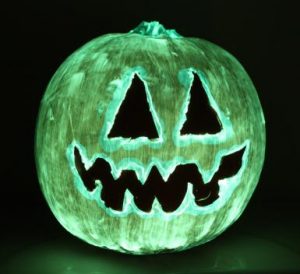 This spooky Halloween pumpkin glows in the dark.

It’s easy to make a glow in the dark pumpkin with a jack-o-lantern face. Because you don’t have to carve the pumpkin, it lasts a long time. The eerie glow looks really spooky!

Glow in the Dark Pumpkin Materials

It’s very easy to make a glow in the dark pumpkin and really only requires a pumpkin and glow paint:

For this project, the jack-o-lantern face is the part that does not glow. If you are using a carved jack-o-lantern, you’ve already got a face. With a carved pumpkin, just coat the pumpkin with glow in the dark paint, and you’re finished.

If you want a face on a whole pumpkin (or watermelon or cantaloupe), there are a couple of ways to get the face::

How Long Will the Glowing Pumpkin Glow?

How long your pumpkin glows depends on the chemical used to make it glow and the light you used to charge your pumpkin. Most glow in the dark paint and glue glows brightest and longest if charged with a black light or sunlight. A cell phone flash light also works very well. Normal overhead lighting will produce a glow, but it may not be as bright or last as long.

How Long Will the Glowing Pumpkin Last?

The type of pumpkin you use will determine how long your glowing pumpkin will last. If you paint a carved jack-o-lantern, you can expect the pumpkin to last a few days to a week before it starts to decay. An uncarved pumpkin may last a few months. Whether it’s carved or not, there are ways to extend the life of a jack o’ lantern. An artificial pumpkin can be used year after year.

See How to Make a Glowing Pumpkin

Here’s how I made this pumpkin. Super easy!