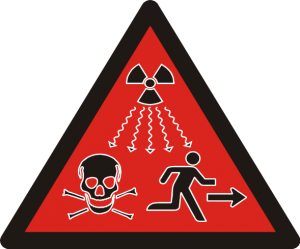 Red IAEA Ionizing Radiation Sign (Kricke)
If you see this sign, you may wish to know how to measure radiation.

Radioactivity is the actual amount of ionizing radiation released by an atom or any other source. This is a count of radioactive incidents regardless of the type of radiation. The curie (Ci) and the becquerel (Bq) are the units of radioactivity. The becquerel is the SI unit of radioactive activity and is defined as 1 disintegration per second. The curie is equal to 3.7×1010 disintegrations per second. This measurement was based on the activity of radium-226. One curie was equivalent to the activity emitted from one gram of radium-226.

Dose equivalent is the measurement of absorbed dose that affects medical conditions in living tissue. This measurement needs to take into account the type of radiation involved.

For x-rays, gamma rays, and beta particles the dose equivalent is the same as absorbed dose.

Alpha particles can cause the most damage in a biological system. The dose equivalent can be 20 times the absorbed dose.

These values are usually accompanied by the type of tissue. Some tissues absorb radiation better than others. The lungs, bone marrow, and stomach absorb radiation more readily than the skin or brain. 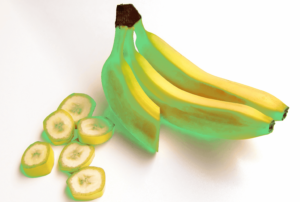 Bananas are radioactive. They contain the naturally occurring isotope of potassium K-40. A 150-gram banana can give off enough radiation to account for 0.1 μSv of dose equivalent. This measurement is known as a Banana equivalent dose or BED. The BED was created to illustrate the low levels of radioactivity people encounter in their daily lives. Typical background radiation is on the order of 100 banana equivalent doses. A chest CT scan is 7000 BED. It would take 35 million bananas (3.5 ×107 BED) to give a lethal dose of radiation to a human.