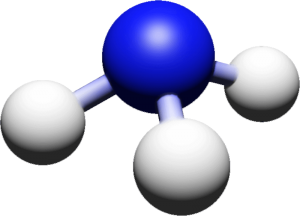 For example, burning propane in a grill. The propane and oxygen in the air combust to create heat and carbon dioxide. You are obviously more likely to run out of propane long before you run out of oxygen in the air. This makes the propane the limiting reactant. Other reactions aren’t quite as easy.

This example problem will show how to use the stoichiometric ratios between the reactants given in the balanced chemical equation to determine the limiting reactant.

Question: Ammonia (NH3) is produced when nitrogen gas (N2) is combined with hydrogen gas (H2) by the reaction

50 grams of nitrogen gas and 10 grams of hydrogen gas are reacted together to form ammonia. Which of the two gasses will run out first? (Which gas is the limiting reactant?)

Now we know the number moles of each reactant, we can use the ratio from the chemical equation to compare the amounts.  The ratio between hydrogen gas and nitrogen gas should be: