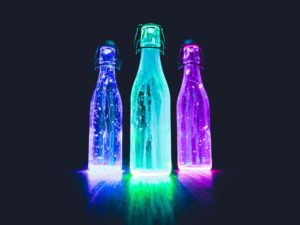 Glow stick lanterns are quick and easy to make.

Glow jars make great night lights, party lights, or fairy lights. There are different ways to make them and lots of cool effects you can create. Here is a collection of easy glow jar tutorials for you to try and a look at the pros and cons of each type of lantern.

One of the easiest types of glow jars to make is a glow stick lantern. Basically, this is a clear container with glow stick fluid splattered on the inside. 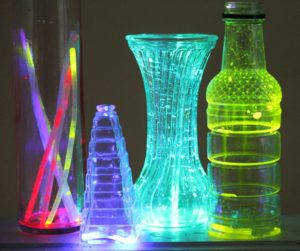 These lanterns look glorious in photographs, but they aren’t as cool in person. When you first cut open the glow stick and expose the chemicals to air, the rate of the chemical reaction increases, so the liquid glows very brightly. Unfortunately, speeding up the reaction also means the glow doesn’t last as long as inside an enclosed stick. Cutting open the stick and waving it around inside the container can be messy and smelly, plus you can basically kiss the container goodbye after the project because the oily liquid is hard to remove. It’s a fun project and worth a try, but probably not your best bet for a cool glow jar.

Glow Jars Made With Glowing Glue or Paint

Glow jars made using glowing glue or paint glow most brightly just after the lights go out.

If you want to mimic the effect of fireflies or tiny glowing fairies, use glow in the dark glue or paint to make the glow jar. 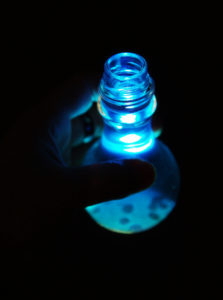 Glow powder comes in different colors and particle sizes. Larger particles glow more brightly, but they are heavier and will sink to the bottom of the container. The brightness and duration of glow depends on the material. Green glows brightest/longest, followed by turquoise, blue, and the other colors. Red and violet are the dimmest and shortest-lived colors. You can embed a fairy or other small object in the resin, but glitter isn’t a great idea because it shows up as dark spots against the glow. This type of jar last forever and makes a nice night light.

Ideally, let the resin set up before sealing the jar and using it. (You don’t actually have to put a lid on the jar, since nothing can spill out.)

Glow Jar Made With Fluorescent Highlighters 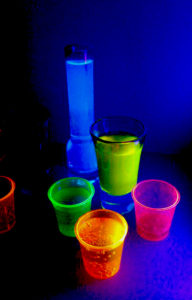 You can enhance the glow of highlighter ink by putting it in fluorescent plastic containers.

All of the other glow jars on this list are either luminescent or else phosphorescent, so they truly glow in the dark. Fluorescent highlight ink only glows under black light. Also, only some highlighters actually glow, so you need to test them with a black light first. Highlighter ink glows brightly, but it’s not usually translucent. It’s up to you whether that’s a pro or a con. 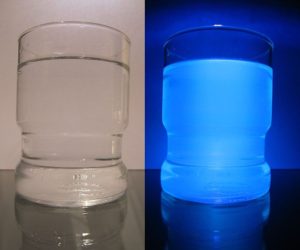 If cutting apart a highlighter sounds like too much work, you could use tonic water instead of highlighter ink. Tonic water contains the fluorescent chemical quinine, which glows blue under ultraviolet light. 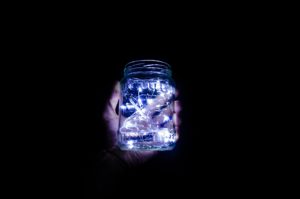 Chemiluminescence is cool, but if it’s just not bright enough for you, it’s time to use actual lights. Fairy lights are short strings of tiny LED lights powered by a battery. The strings are short enough and tiny enough you just put the whole deal into a jar. Some even twinkle. Some include a remote so you can change the colors any time you want.

You may have to insert the batteries, but basically all you do is turn them on and go!