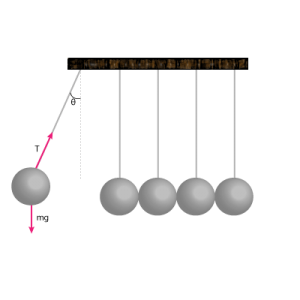 This model of a common desktop toy shows the forces acting on the raised ball. The principles of impulse and momentum show how the momentum is transferred to each ball and the process repeats.

Impulse and momentum are physical concepts that are easily seen from Newton’s Laws of Motion.

Start with this equation of motion for constant acceleration.

If you rearrange the equation, you get

solve this for a and get

Stick this into the velocity equation and get

Multiply both sides by m

Mass times velocity is known as momentum and force applied over time is called impulse.

Question: A 50 kg mass is sitting on a frictionless surface. An unknown constant force pushes the mass for 2 seconds until the mass reaches a velocity of 3 m/s. 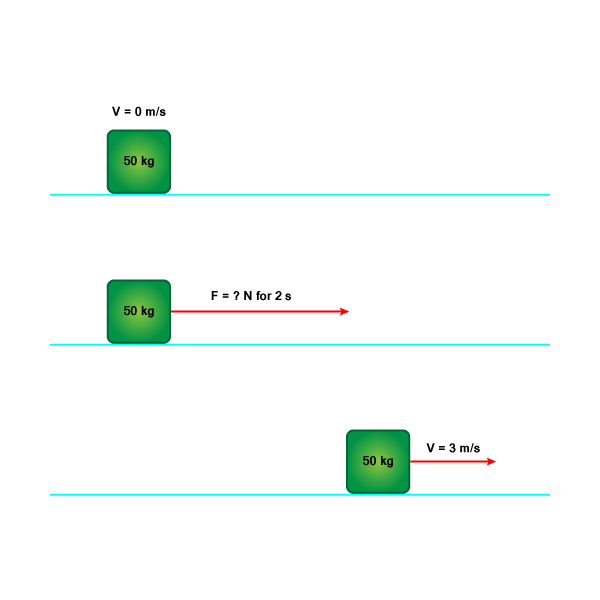 Part a) What is the initial momentum?

Momentum is mass times velocity. Since the mass is at rest, the initial velocity is 0 m/s.

Part b) What is the final momentum?

After the force is finished acting on the mass, the velocity is 3 m/s.

Part c) What was the force acting on the mass?

Part d) What was the impulse acting on the mass?

The impulse is the force multiplied by the time passed. It is also equal to the change in momentum over the same time period.

These problems are relatively simple as long as you keep your units straight. Impulse and momentum should have the same units: mass⋅velocity or force⋅time. Check your units when you check your answer.

Another possible way to cause errors is to confuse your vector directions. Velocity and Force are both vector quantities. In this example, the mass was pushed in the direction of the final velocity. If another force pushed in the opposite direction to slow down the mass, the force would have a negative value compared to the velocity vector.

If you found this helpful, check out other Physics Example Problems.