Complex systems can cause difficulty for students. When two different systems are connected together, there are some factors they share in common. Identifying these connections can make solving problems easier. This example problem has a complex system of two blocks connected by a massless string.

Example Problem:
Two blocks are connected by a massless string around a frictionless pulley. Block A is sliding across a frictionless surface and is pulled by the second block as Block B falls.
a) What is the acceleration of the system?
b) What is the tension in the string?

Solution:
This illustration shows the arrangement of the blocks. 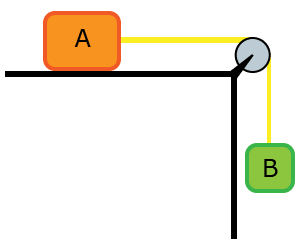 This system is coupled together by the massless string. As Block A moves to the right a distance Δd in some time t, Block B moves down Δd. That means the block’s velocities are the same.

The velocity directions can be adjusted by the coordinate system chosen for each system. Since the velocities are always the same, their accelerations are the same.

Let’s find the forces of both systems. 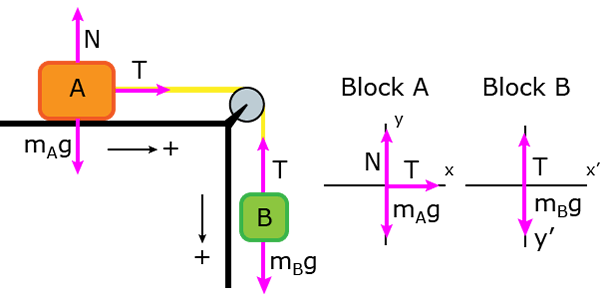 Start with Block A. Block A is being accelerated in the positive x-direction.

Since Block A is not moving in the vertical direction, the sum of the forces in that direction is equal to 0.

Now find the forces on Block B. Block B is being accelerated down in the positive y’-direction and no forces are acting in the x’-direction.

Set these two equations equal to each other

Now we have two equations with two unknown variables. The simplest way to solve this is to solve one equation for one of the variables and then substitute that result into the second equation to solve for the other variable. Let’s solve the last equation for T.

Plug this expression into the force equation involving the tension of the string from block A and solve for acceleration.

Add mBa to both sides

Factor out the acceleration

Divide both sides by (mA + MB)

Now that we have the answer to Part a of the question. We can use this to find the tension. Plug in the solution into one of the equations containing the tension. Let’s use the easy one:

Note how the acceleration will always be less than g. Also notice the tension will always be less than the weight of Block B (mBg). One common mistake in this type of problem is to assume the tension in the string is equal to the weight of Block B. This would only be true if the Block B was in equilibrium. Since the block is accelerating, it is not in equilibrium.