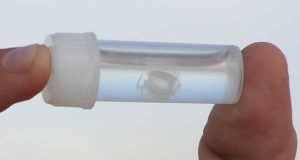 Irukandji jellyfish typically live in deeper waters around coral reefs, but occasionally they make their way to beaches. They are extremely difficult to spot since their bodies are barely the size of your fingernail and translucent. Beaches will be closed even after one sting is reported in the area.

Australian scientists may have found a way to predict Irukandji jellyfish blooms around The Great Barrier Reef off the coast of Queensland. They discovered a correlation between prevailing winds and reported sting history. On the day before a sting, the southeasterly trade winds are relaxed with calm winds along the shore. Their study was published online at the Journal of the Royal Society Interface and will appear in the July 2014 print issue.

This means beach management could keep an eye on the weather and avoid unnecessary beach closures and painful stings for beach goers.