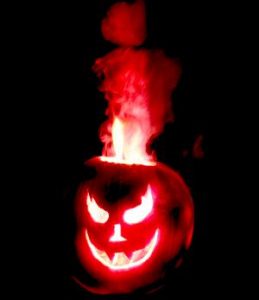 The red flames shooting out of this Halloween pumpkin come from a strontium salt.

What’s better than a regular Halloween jack o’ lantern? How about one that shoots out red fire? The red flames are easy to produce and last about an hour. They shoot up 2-3 feet into the air and range from orange to vivid red. Here’s how to do it:

Use a real pumpkin, not a plastic one. Plastic would melt. The flare is a source of strontium nitrate. Strontium emits red light when it is heated in a flame.

Use the type of flare that you strike, not the kind you shoot from a flare gun. Flares are sold with emergency equipment for camping, driving, etc.

This is a fire project, so adult supervision is required.

Perform the project on a fire-safe surface, preferably outdoors. Not that you would, but don’t eat the pumpkin after performing the project. The strontium nitrate isn’t all that toxic, but kerosene is completely inedible. Burning it releases smoke.