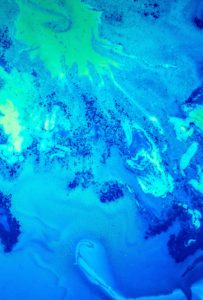 Dopants in phosphors can produce a range of glow in the dark colors. (Joel Filipe)

In the olden days, back before we could buy glow powder on the internet, people made it themselves. Sometimes they took a scientific approach, mixing chemicals to see if anything cool happened. More often than not, glowing materials were discovered by accident. For example, the discovery that rotting corpses and meat emit bioluminescence was likely a creepy and unpleasant accident (although useful to coal miners). The discovery that oyster shell powder can be made to glow in the dark, on the other hand, seems to have been a result of experimentation. The project is described in Works of the Cavendish Society: Handbook of Chemistry, by Leopold Gmelin, translated in 1848 and available as a free download online. The resulting powder is phosphorescent, which means it glows brightly under ultraviolet light (black light) and continues to glow for some time after the light is turned off.

If you’re the type who loves to play Mad Scientist, this is the project for you. It’s not difficult, plus there are a lot of changes you can make to “see what happens”.

Glow in the Dark Powder Materials

The recommended materials for this project are:

The Chemistry of the Project

The 1848 text states the glow from oyster shells is best if the shells are not ground, but the researchers likely had a furnace to heat their materials. Unless you have a furnace, it’s more practical to grind the materials together. 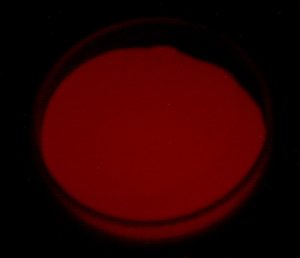 Phosphorescent calcium sulfide often glows red. However, the color of the glow, its intensity, and how long it lasts depend on the particle size (larger glows brighter and longer) and the dopant. If you add a small amount of copper chloride (CuCl2) dissolved in water before you heat the materials, you may get a blue glow. The original reference and other sources state adding a couple of drops of bismuth subnitrate (Bi5O(OH)9(NO3)4) helps form a phosphor. Some researchers also recommend adding a bit of corn starch or rice starch. 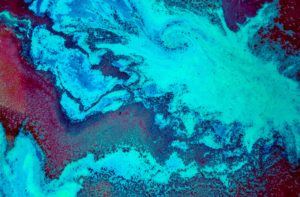 The glow in the dark powder from crushed oyster shells may produce a range of colors. (Joel Filipe)

If you don’t see a glow, the two most likely causes are insufficient heating or inadequate ultraviolet light. A certain minimum temperature must be reached to supply the activation energy to make calcium sulfide. There are many “flavors” of black lights. Some do a better job offering excitation for a phosphor than others. If you have access to a true ultraviolet lamp, use it.

See How It Works

This video does a great job explaining the procedure, although the author’s video camera didn’t do well showing the afterglow when the black light was turned off. For utterly stunning examples of what is possible with this technique, explore Cran Cowan’s Flickr  gallery of synthetic fluorescent minerals. Notice he offers rough recipes for his creations that you can use as a starting point for further experimentation.

A related project is described in another free e-book:

The Journal of the Royal Institution of Great Britain, vol 1, January 1831.