Special relativity theory introduced an interesting notion about time. Time does not pass at the same rate for moving frames of reference. Moving clocks run slower than clocks in a stationary frame of reference. This effect is known as time dilation. To calculate this time difference, a Lorentz transformation is used.

One way this effect was experimentally proven was measuring the lifetime of high energy muons. Muons (symbol μ–) are unstable elementary particles that exist for an average of 2.2 μsec before decaying into an electron and two neutrinos. Muons are formed naturally when cosmic ray radiation interacts with the atmosphere. They can be produced as a by-product of particle collider experiments where their time of existence can measured accurately.

A muon is created in a laboratory and observed to exist for 8.8 μsec. How fast was the muon moving? 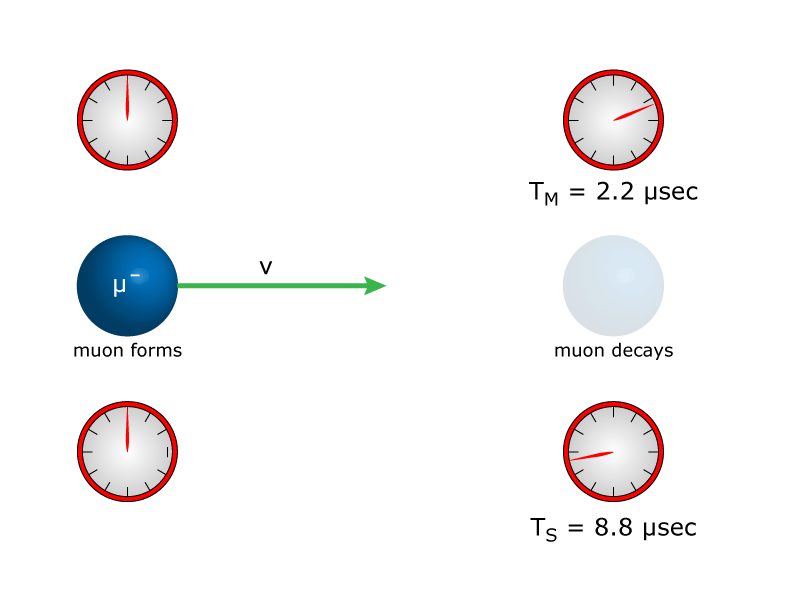 A muon forms at t=0 moving at a velocity v. After 2.2 microseconds, the muon decays. A stationary observer measured the lifetime to be 8.8 microseconds. What was the velocity of the muon?

From the muon’s frame of reference, it exists for 2.2 μsec. This is the TM value in our equation.
TS is the time measured from the static frame of reference (the laboratory) at 8.8 μsec, or four times as long as it should exist: TS = 4 TM.

We want to solve for velocity, Let’s simplify the equation a little bit. First, divide both sides by TM.

Flip the equation over

Square both sides to get rid of the radical.

This form is easier to work with. Use the TS = 4 TM relationship to get

Cancel out the TM2 to leave

Subtract 1 from both sides

Multiply both sides by c2

Take the square root of both sides to get v

One important note about these types of problems is the velocities must be within a few orders of magnitude of the speed of light to make a measurable and noticeable difference.