Relativity tells us moving objects will have different lengths in the direction of motion, depending on the frame of reference of the observer. This is known as length contraction.

How fast would a meter stick have to move to appear half its length to a stationary observer? 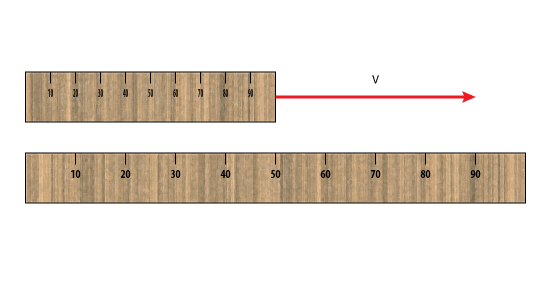 In the above illustration, the top meter stick is measured as it zips by at velocity v. Both meter sticks are the same length (1 meter) in their own frame of reference, but the moving one appears to only be 50 cm long to the stationary observer. Use the Lorentz transformation contraction formula to find out the value of v.

Plug these two values into the equation

Divide both sides by LM.

Cancel out the LM to get

Square both sides to get rid of the square root

Subtract 1 from both sides

Multiply both sides by c2

Take the square root of both sides

Note the moving frame of reference must be moving rather quickly to show any measurable effect. If you follow the same steps as above, you can see the ruler needs to be traveling at 0.045c or 4.5% the speed of light to change the length by a millimeter.

Note too that the meter stick only changes its length in the direction of the movement. The vertical and depth dimensions do not change. Both rulers are as tall and thick in both frames of reference.