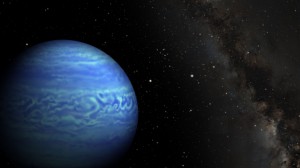 A star has been discovered a mere 7.2 light-years from our Sun. The reason no one ever noticed it was because this star is a brown dwarf. A brown dwarf star is a mass of gas too small to sustain fusion reactions in their core. Their size ranges between approximately 2 and 100x the mass of the gas giant Jupiter, the largest planet in our Solar System. Because they don’t have the fusion fire other stars have, brown dwarves are usually cold and not very bright. Our new neighbor is the coldest brown dwarf to be discovered with temperatures between -48°C and -13°C.

The cool temperature explains why it was difficult to detect even though it is so close. Astronomers at Penn State analyzed data from NASA’s Wide-Field Infrared Survey Explorer (WISE) and Spritzer Space Telescope and noticed a fast moving spike in temperatures. This suggested something close by. Further investigations confirmed the existence of the star now named WISE J085510.83-071442.5. This is the third close neighbor brown dwarf this team has discovered. In 2013, two other brown dwarf stars where found only 6.5 light years from our Sun. This pair of stars became our third nearest star. What other new stars will the infrared eyes of WISE detect next?