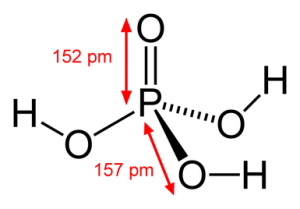 Phosphoric acid is an example of an oxoacid. (Ben Mills)

An oxoacid is a type of acid that contains oxygen bonded to hydrogen and another element. This chemistry example problem explains how to identify the strongest acid from a list of oxoacids, also known as oxyacids.

Which of the following is the strongest acid?

In this problem, all of the acids contain the same central atom, a chlorine atom.