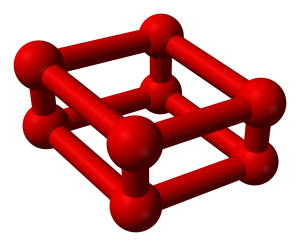 You know oxygen in air is colorless and you may have heard that liquid oxygen is pale blue, but did you know oxygen also occurs in pink, orange, red, black, and even a metallic form? At atmospheric pressure, liquid oxygen cools into solid oxygen, which forms blue crystals. However, as the pressure is increased and/or the temperature is lowered, phase transitions occur that change the structure of oxygen and also its color. Six phases of solid oxygen are known:

Tetraoxygen (O4) is a transient state, although octaoxygen (O8) is stable. The metallic phase of oxygen exhibits superconductivity.