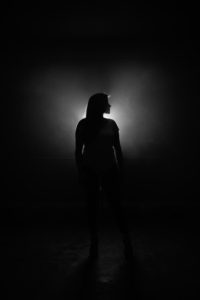 Scientists have learned a person really does have an aura of light. (Chad Madden)

An aura is a halo of light surrounding a person. While most people associate auras with the paranormal, they really do exist. Scientists have known for a while now that humans emit very low levels of visible light. I’m not talking about infrared radiation or heat — this is light in the visible spectrum that you could see if your eyes were 1000x more sensitive than they are. Most organisms probably emit visible light as a result of biochemical reactions involving free radicals.

Japanese researchers have taken photographs of men emitting visible light. They found that the level of ‘glow’ changes throughout the day and that the face emits more light than the body. A possible reason for this could be that most people are more tanned on their faces. The pigment responsible for a suntan, melanin, is fluorescent, so it may enhance the glow. Although the researchers indicated visible light was emitted, they did not specify the wavelength of the light, only the intensity as a function of time.