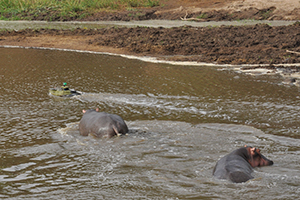 Remote sensing is a common method to gather data in areas too dangerous for humans. Scientists at Carnegie Mellon University wanted to measure water quality in hippo pools in Kenya’s Mara River.

During times of low flow rates, fish die downriver due to low oxygen levels in the water. The researchers wanted to see if the estimated 4,000 hippopotami* using the river as a toilet upstream had anything to do with the problem. One hippopotamus adds approximately 22 pounds (10 kg) of wet feces to the river each day. When the river is running high, this waste is washed downriver. During the dry season, this waste gathers at the bottom of the hippo wading areas where bacteria break it down and consume all the oxygen in the water. When the wet season begins, all this dead water flows downstream and oxygen levels crash and the fish die.

Testing the waters involves a serious problem. Hippos are extremely territorial and dangerous. They are known to attack boats and people that venture near their waters. To get around this, the researchers built autonomous sensing robots. These robots are 13-pound boats made of plastic and floated using packing material airbags. Each boat carried android smartphones for onboard computing power and a variety of sensing instruments to measure depth, oxygen levels, water temperature and electrical conductivity. 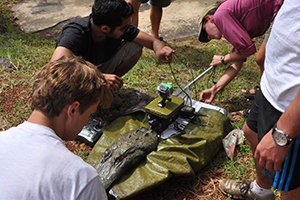 At the suggestion of a local Maasai guide, they camouflaged their robots to look like crocodiles. The robot crocodiles were, with one exception, largely ignored by the hippos. The exception robot managed to outrun the 2.5 ton hippo that chased it away.

The robot crocodiles managed to complete their task. The data they collected are still being analyzed, so it is still unknown the level of impact the hippo dung has on water quality.