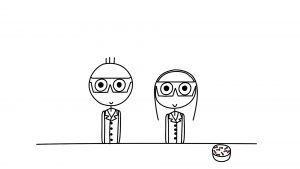 Science is funny and scientists have a great sense of humor! Do you know any science jokes or riddles or are you looking for one? Share your science joke or read jokes submitted by other readers.

Q: What is the name of the molecule bunny-O-bunny? A: An ether bunny
—gemdragon

When my wealthy aunt passed away, I got all the antimony!

Which would dissolve faster?

If a bear in Yellowstone and a bear in Alaska fall into the water, which would dissolve first? The Alaska bear because it is polar.
— Bearly Funny

There are lots of excellent endings to this one. Last words of a chemist: … and now for the taste test.
— Anne

The failing chemistry student reads the following question on their final: If H2O is the formula for water, what is H2O4? He answers: “Washing, Cleaning and Drinking”
— Wet Blanket

Q: How did the football cheerleader define hydrophobic on her chemistry exam? A: Fear of utility bills.
—gemdragon

Several scholars were asked “What is 2+2?” The engineer whips out his calculator and answers “3.99” The physicist pulls out some technical references, models the problem on the computer and proudly announces “The answer is between 3.98 and 4.02” The statistician replied “I need more data points” The philosopher replies “What is the meaning of 2?” The psychologist replies “How does 2+2 make you feel?” The medical student replies “4” The others look at him and ask “How do you know?” He replies “I memorized it”
— Chem Star

Asked in pass/fail viva exam in pharmacology “What’s dopamine” he replied “Is that what does dopa mean or what?” He failed.
— archie prentice

Why aren’t there any good chemistry jokes? Because they Argon..
— mika

(1) if something can go wrong, it will do so just before your grant is up for review; (2) if the reading on your detector is correct, then you have forgot to plug it in; (3) if several things can go wrong then they will do so all at the same time; (4) if nothing can go wrong with your experiment, something still will; (5) left unto itself, your experiment will go from bad to worse; on the other hand, if you pay attention to the experiment then it will take three times longer to complete than you thought it would; (6) Nature is both subtle and malicious (Murphy stole this one from Albert Einstein); (7) a straight line will never fit your data, and using a wiggly line will result in the rejection by referees of the publication of work; (8) if you make a great discovery today, you will find a major error in your methods tomorrow (experienced experimentalists call this effect “here today, gone tomorrow”); (9) in contrast to a radio, banging your apparatus when you are at peak frustration
— yog

Why did the chicken cross the mobius strip?……To get to the same side. buh duh chuh.
— Nothing better to do in economics class

Once an atom went to a bar, and said “OMG! I lost an electron”. The bar guy asks “are you sure?” and then the atom says “Yes I am positive”
— Crystal-Mask

I’ve just learned that the Higgs Particle gives mass to other particales. Therefore I think “The Pope Particle” is a better moniker for it than “The God Particle”. OK back to my cage 🙂
— Wayne Thresher

The teacher says to his chemistry class- “why is a Neon atom so lonely?” pupil says “because it’s friends argon”
— tash

Q: Why do subatomic particles hate electrons?
A: because they are so negative.
— w

Hydrogen ATOMS RESPECT IN THE GHETTO

2 hydrogen atoms walk into a bar, one says to the other ‘i think i’ve lost an electron’ the other says ‘are you sure?’ to which the 1st 1 replies ‘Yes.. i’m positive’
— jimmy stockton

If it’s green or it wiggles, it’s biology. If it stinks, it’s chemistry. If it doesn’t work, it’s physics.
— Thrakles

The most important thing to learn in Chemistry is to never lick the spoon.
— Frank

You might be a chemist if you wash your hands BEFORE going to the bathroom.
— Rich L

Reasons to be a chemistry student

– All the coffee you could want – Cool safety glasses – Exposure to all kinds of toxic and cencerous substances – Because it’s pHun! – Access to 100% ethanol – Learn to completely dissolve the bodies of your enemies – Always have plans for Friday night: Work in lab – Desire to be blamed for all faults in the environment and causes of cancer – Become a master chef at poverty cuisine
— Chemistry Student

One thought on “Science Jokes”