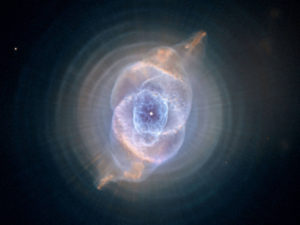 Hubble image of the Cat’s Eye nebula where nebulium was discovered.
NASA

December 21 is Ira Sprague Bowen’s birthday. Bowen was an American astrophysicist and spectroscopist who disproved the existence of the element ‘nebulium’.

In 1860, one of the new tools for scientists was absorption spectrum analysis. Look closely at the light after it passes through a heated gas with a diffraction grating or prism and you will see distinct colored lines. Gustav Kirchhoff showed these lines are unique for different elements making up the gas. The element helium was discovered in 1868 using this technique when used during a solar eclipse.

English astronomer William Huggins was using this new tool in 1864 while observing nebulas. The spectra collected from the Cat’s Eye nebula contained a fat green line no one had ever measured before. Looking a little closer, the line was actually two lines at 595.9 nm and 500.7 nm. Neither of these lines was associated with any known element, so Huggins believed he discovered a new element. Since it was discovered in a nebula, he called his new element nebulium.

Bowen was investigating the ultraviolet spectra of the lighter elements of the periodic table in 1927. He discovered nebulium’s green lines could be reproduced by doubly ionized oxygen (O2+) at very low density. Since spectral lines are unique to one element, nebulium did not exist. Bowen effectively disproved the existence of an element known for 63 years.

Krebs is an American biochemist who shares the 1992 Nobel Prize with Edmond Fischer for their discovery of reversible protein phosphorylation. They described how reversible phosphorylation activates proteins to perform cell processes and then returns the protein back to its original state after the process is complete.

Tinbergen was a Dutch zoologist who was awarded a third of the 1973 Nobel Prize in Medicine for his research into the social behavior of seagulls and their relationship to man’s social behavior. He related seagull learned and instinctual behavior to human behavior to illustrate similarities in survival behaviors. 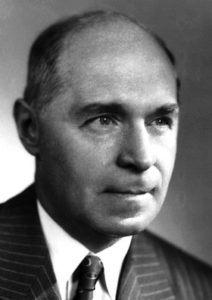 Muller was an American biologist who was awarded the 1946 Nobel Prize in Medicine for his work research on mutations and genetic effects of x-ray radiation. He showed how x-rays would break chromosomes and change individual genes. He used his work to illustrate the dangers of the cumulative effects of radiation.