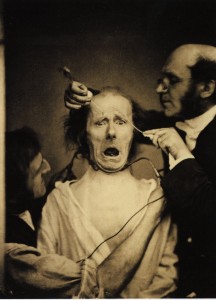 A demonstration of the stimulation of facial muscles by Dr. Duchenne (right).

Duchenne began his neurophysiology work with a new device called an electropuncture. This device was designed to deliver electric shocks to stimulate muscle tissue using sharp electrodes. He eventually improved the device to perform the same task, but without the stabbing electrodes. Using this device, he began a systematic investigation of the effects of localized electrical stimulation on physiology and therapy treatments. He investigated the cause of several different types of muscular atrophy and paralysis caused by diseased or damaged nerve tissue. Nearly all of his work dealt with the relationship of nerves and muscles.

His published works were accompanied by another new invention, photographs. The most famous was The Mechanism of Human Physiognomy. One section of this publication showed how the muscles in a human face can produce facial expressions. He showed smiles produced by happiness are not only produced by muscles associated with the mouth, but also with the eyes. While there is a lot of interesting findings in this book, the photographs made him something of a celebrity. Duchenne employed six different models, including the old toothless man in the above photo. He outlined 13 different basic emotions that were controlled by one or two specific muscles. While most of his colleagues thought he was strange, if not crazy, he continued his research. Eventually, he would publish the accumulation of his life’s work, Physiology of Movements, Demonstrated with the Aid of Electrical Experimentation and Clinical Observation, and Applicable to the Study of Paralyses and Deformations to change his peer’s opinions of his work and gain him the recognition he was refused through his life.

Fun Fact: The smile of genuine happiness which uses both mouth and eye muscles is known as a “Duchenne Smile”

Chase was an American immunologist who discovered cell mediated immunology. He discovered that white blood cells trigger the immune response in the body when an antigen appears. This led to the discovery of lymphocyte cells and B and T cells. 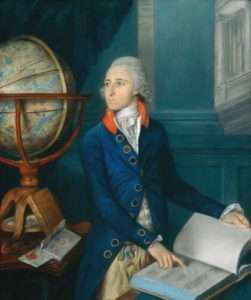 Goodricke was an English astronomer who was the first to propose periodic variable stars were stars with another body orbiting and eclipsing the light from the star.

His research on the variable star Algol would earn him entry to the Royal Society just four days before his death from pneumonia at age 21. 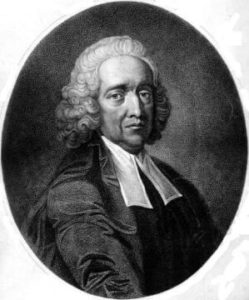 Hales was an English clergyman and natural philosopher who first charted the movement of water in plants and that they absorb air. During this work, he theorized plants may use light as a source of energy for growth. This would eventually lead to the discovery of photosynthesis.

Hales also discovered the dangers of breathing ‘stale air’ and invented a ventilator to use on ships and in prisons. His bellows system reduced incidences of disease, dry rot and was even used to dry grains.

He invented the pneumatic trough to collect gases in the laboratory. This device collects gasses by allowing a collection tube to pass through a liquid into a bulb filled with water. As the gas enters the bulb, the gas pushes the water out and keeps the gas in. Once the water is gone, the bulb is filled with the gasses collected.