Home » Science Notes Posts » Biochemistry » Is Urine Sterile? Turns Out the Answer Is No 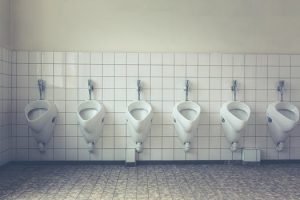 No matter how clean the bathroom, urine isn’t sterile, so there will always be bacteria.

If you get stung by a jellyfish or fall down and scrape your knee, a friend’s offer to pee on your injury might seem like good medicine. Or, you might be dying of thirst, with nothing to drink but your own urine. It’s liquid… it’s sterile… drinking it should be fine, right? Wrong!

Why We Think Urine Is Sterile

It’s a common misconception that urine is sterile. It’s not. Mid-stream urine, collected after disinfecting the urethra and urinating a bit isn’t sterile. Urine in the bladder, before it encounters air, still is not sterile. So why do so many people think it is? This urban legend goes back to the 1950s, when epidemiologist Edward Kass sought a simple method to screen patients for urinary tract infections prior to surgery. Kass devised the mid-stream urine test, which is still in use today. Collecting urine mid-stream meant most of the bacteria present on skin and at the opening of the urethra were flushed away, so the sample provided a good representation of bacteria in urine. However, then Kass set a cut-off point to separate a normal number of bacteria from the amount present in a typical infection. According to his limit, if fewer than 100,000 colony-forming units of bacteria were present per milliliter of urine, the test was considered “negative” for a bacterial infection. Now, one hundred thousand bacteria per milliliter is certainly not sterile, but people (including doctors and nurses) came to associate a negative result as “no bacteria”.

Modern Measurements of Bacteria in Urine

Evann Hilt of Loyola University in Chicago and her team reported findings concerning the amount and type of bacteria found in urine at the 2014 meeting of the American Society for Microbiology. Hilt’s results showed that 60 of the 84 specimens that were examined (over 71%) contained bacteria, even though 90% of the specimens yielded a result of “no growth” using standard urine culture techniques. Urine from control patients contained 33 different genera of bacteria, while those from overactive bladder patients had 77 different genera, including types of bacteria not seen in healthy patients. The bottom line: Even urine from healthy people contains bacteria.

Is it bad that urine isn’t sterile? No. All parts of the body, both inside and out, contain bacteria. On the skin and in the gastrointestinal tract, the normal microflora help protect against pathogens. Bacteria have even been found on the baby’s side of the placenta and in the human brain (despite the blood-brain barrier urban legend). Ultimately, awareness of the bacteria in urine may help medical professionals protect against urinary tract infections by working with the body’s natural defenses.

Knowing urine contains bacteria, it doesn’t make sense to use it fresh-from-the-bladder to “disinfect” a wound. Chemicals in urine make it a poor treatment for a jellyfish sting because contact causes the nematocysts (stinging cells) to release venom all at once. Drinking one’s own urine doesn’t introduce unfamiliar bacteria, but the salts in urine ultimately worsen dehydration. Drinking someone else’s urine could put a person at risk of disease.

One thought on “Is Urine Sterile? Turns Out the Answer Is No”