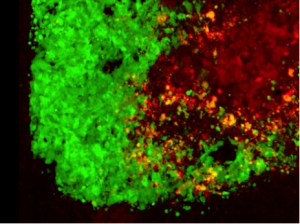 A modified version of the herpes simplex virus (HSV) has shown to be a promising means to fight cancerous brain tumors. The virus easily infects the tumor cells and causes lysis, destroying the cell, but does not replicate in terminally differentiated or non-dividing cells.0

The problem is.what the body responds to the virus and fights it off before it can effectively do its work. To combat this, researchers at the Harvard Stem Cell Institute (HSCI) used mesenchymal stem cells (MSCs). MSCs are stem cells that produce bone marrow tissue and are often used as drug delivery vehicles. They hoped these cells would shield the virus from the immune system long enough for them to do their work. In mouse trials, they injected the virus-infected MSCs into tumors. Using imaging markers, they watched the virus transfer from the MSCs to the first layer of the cancer and to the rest of the tumor.

Most brain cancer patients undergo a surgical process called ‘dubulking’. The basic goal is to remove the bulk of the tumor so later treatments have less to fight. In their mouse trials, the HSCI researchers injected their virus-infected stem cells into the cavity formed from the debulking surgery. The stem cells held the virus in place long enough to kill off some of the cancer in the area of surgery. When mixed with a biocompatible gel, their mixture would stay in the cavity even longer and do a more complete job.

They hope to move from mice to humans within the next couple of years. They also hope this technique will transfer to different oncolytic viruses used to treat other types of cancerous tumors. This research appears in the May 2014 Journal of the National Cancer Institute.