Home » Science Notes Posts » Biology » Why Do Zebras Have Stripes? 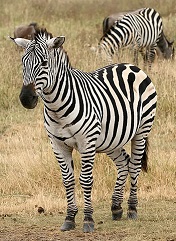 There is evidence that zebra stripes do all these things, but which one makes the most sense? Nature Communications reports on a study which shows pest control may be the winner. They found the range of zebras and the annoying, biting, disease-carrying flying tse-tse flies are nearly the same. These flies are known to torment horses and other animals year-round and transmit a variety of equine diseases. Studies have also shown flies prefer to land on uniform surfaces over striped surfaces. It makes ecological sense to have a set of stripes if you would rather not have flies on you.

Too bad human stripes don’t do the same thing with mosquitos.