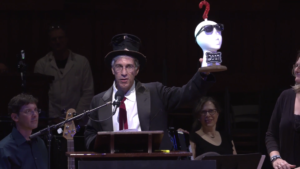 The 2017 Ig Nobel Prize awards ceremony was held September 14 at Harvard University. The ceremony honored ten real scientists who have done something that makes people laugh and then makes them think.

The theme for 2017 was “Uncertainty.” The festivities included the traditional paper airplane deluge, “Welcome, Welcome” speech, introductions of Ig Nobel and Nobel laureates, the actual awards, mini-lectures and science demonstrations, and an original mini-opera entitled “The Incompetence Opera.” The Boston Typewriter Orchestra entertained the audience with a pre-ceremony mini-concert. 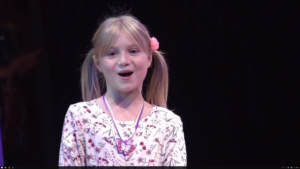 Winners of the Igs attend the ceremony at their own expense, but they do get prizes! This year’s prizes included the Ig Nobel Prize, a piece of paper certifying the award (signed by Nobel laureates), and 10 trillion dollars (Zimbabwe dollars, so not quite as exciting as it sounds). The “prize” was a tropy in the shape of a human head, wearing sunglasses, and adorned with a question mark (uncertainty).

Physics Prize – For examining the question: “Can a cat be both a solid and a liquid?” A solid has a defined shape and volume, while a liquid has a defined volume, yet lacks a defined shape. The internet is filled with data on cats, which appear quite comfortable conforming to the shape of their container. (Antoine Fardin [France]) 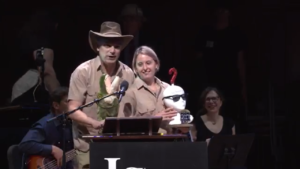 Who knew? Handling a reptile increases your willingness to gamble.

Economics Prize – For their experiments to see how contact with a live crocodile affects a person’s willingness to gamble. If you’re curious, read the paper: Rockloff, J.R. and N. Greer. “Never Smile at a Crocodile: Betting on Electronic Gaming Machines is Intensified by Reptile-Induced Arousal” J. Gambl. Stud. (2010) 26:571-581. If you’re super curious, bring a lizard to Vegas with you next time you hit the casinos and see what happens. (Matthew Rockloff and Nancy Greer [Australia, USA])

Anatomy Prize – For medical research exploring the question, “Why Do Old Men Have Big Ears?” While no explanation for the phenomenon was offered, data indicates ears continue to grow about 2 millimeters a decade. Men tend to have shorter hair than women, so the effect is more noticeable. (James Heathcote [UK])

Biology Prize – For their discovery of a male penis and a male vagina in a cave insect. Since dictionaries describe the penis as a male organ and the vagina as a female organ, the investigators believe some revision is in order. (Kazanori Yoshizawa, Rodgrigo Ferreira, Yoshitaka Kamimura, Charles Lienhard [Japan, Brazil, Switzerland])

Fluid Dynamics Prize – For studying the dynamics of liquid-sloshing to learn what happens when a person walks backwards while carrying a cup of coffee. The investigator discovered the secret to walking and not-spilling a cup of coffee is to hold it from the top, look straight ahead, and walk straight backward. (Jiwon Han [South Korea, USA]) 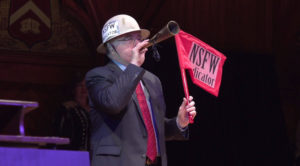