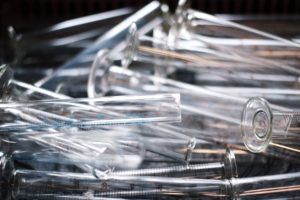 Learn the difference between two important chemistry terms. Sometimes these words are (incorrectly) used interchangeably. Other times, they are the terms students have a hard time keeping straight. These are differences relating to chemistry and the physical sciences, although you’ll encounter some of these terms in daily life, too.

What Is the Difference Between Chemistry and Chemical Engineering?

Chemistry is the study of matter and its properties. Chemical engineering is applied chemistry, where engineering and science are combined to solve practical problems and make products.

A chemical property is a characteristic that can be observed only by performing a chemical reaction, changing the chemistry of a sample.

What Is the Difference Between Mass and Weight?

Mass is the amount of matter in a sample while weight is how the force of gravity acts upon that mass. On Earth, where gravity acts on all masses, they have equivalent values.

In an ionic bond, one atom essentially loses an electron to another atom. Ionic bonds occur between atoms that have different electronegativities from each other. This occurs between a metal and a nonmetal, as in sodium chloride, NaCl.

In a covalent bond, atoms share electrons. Covalent bonds occur between atoms with comparable electronegativity values, such as two nonmetals. An example of a covalently bonded molecule is water, H2O.

Know the Difference Between Dependent and Independent Variables

What’s the Difference Between an Atom and an Ion?

An atom is the smallest unit defining an element. Each atom contains at least one proton and usually has neutrons and electrons.

An ion can be an atom or it can be a molecule. In an ion, there are different total numbers of protons and electrons, so an ion carries a net electrical charge. The electrical charge is written as a superscript following the ion symbols. Examples include H+ and OH–.

What’s the Difference Between Organic and Inorganic?

Know the Difference Between Accuracy and Precision

Know the Difference Between Element Groups and Periods

Groups and periods are sets of elements that share common properties. On a periodic table, element groups are vertical columns, while element periods are horizontal rows.

What Is the Difference Between a Cation and an Anion?

What Is the Difference Between Control Group and Experimental Group?

For example, if you are testing whether supplementing a diet with zinc prevents colds, the experimental group would be given supplemental zinc while the control group would not.

What Is the Difference Between Steam and Smoke?

Steam and smoke often look similar to each other, but they are different types of vapor. Steam is water vapor, the gaseous form of water. Smoke is formed by combustion and consists of several gases, including steam, carbon oxides, and sulfur oxides, and also particulates such as soot.

Is There a Difference Between Flammable and Inflammable?

If something is flammable, it can catch fire readily. Although you might think inflammable would mean the opposite, it turns out inflammable also refers to anything that catches fire easily. The two words mean exactly the same thing! The opposite of flammable or inflammable is nonflammable.

What Is the Difference Between Sodium and Salt?

Sodium is a chemical element. Salt commonly refers to sodium chloride, a compound which contains sodium and also chlorine. However, in chemistry, a salt technically is any ionic compound formed from reacting an acid with a base, For example, magnesium chloride is a salt which does not contain any sodium.

What Is the Difference Between Oxidation and Reduction?

What Is the Difference Between Heterogeneous and Homogeneous?

Heterogeneous refers to mixtures that are not uniformly distributed. You can identify them based on their appearance. There will be areas containing more of one color or texture than other areas. Examples of heterogeneous mixtures include a handful of candies, a pile of rocks, or Rocky Road ice cream.

What Is the Difference Between Molarity and Normality?

Both molarity and normality are ways of expressing the concentration of a chemical solution. Molarity is the number of moles of solute per liter of solution. It is denoted with a capital letter M, as in a 1.0 M solution of HCl.

What Is the Difference Between a Molecule and a Compound?

For the most part, you’ll hear people use the terms “molecule” and “compound” interchangeably. Some texts define a molecule as any chemical species formed when two or more atoms bond together and a compound as a molecule made up of two or more different types of atoms. Oxygen gas, O2, is a typical molecule example. Table salt, NaCl, is a good example of a compound.

What Is the Difference Between Metals and Nonmetals?

The chemical elements can be divided into two groups: metals and nonmetals. Some elements have intermediate properties and are called semimetals or metalloids.