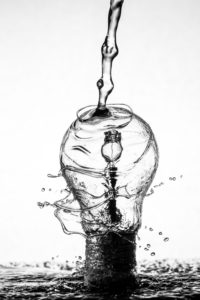 Pure covalent compounds don’t conduct electricity when dissolved in water because they are not electrolytes. (Sharon Pittaway)

For example, sugar is a covalent compound. Pure sugar is a crystalline solid that does not conduct electricity. When dissolved in water, sugar molecules separate from each other and diffuse throughout the solution, but their chemical identity is unchanged. No ions are released into the water, so its conductivity is unchanged. Water is also a covalent compound and is a poor electrical conductor.

In contrast, salt (NaCl) is an ionic compound. Sodium (Na) and chlorine (Cl) have very different electronegativity values, so when sodium and chlorine form a chemical bond, the electrons spend more time associated with one atom than the other. In other words, the ionic bond is polar. When salt dissolves in water, it dissociates into Na+ and Cl– ions. The ions can conduct electricity.So, for a first year chemistry student, it’s generally true that no pure covalent compounds conduct electricity.

As you delve more deeply into chemistry, it becomes apparent covalent and ionic bonds are two ends of a spectrum of chemical bonds. Covalent bonds may be pure covalent bonds when two atoms forming the bond are identical (e.g., H2, O3). Polar covalent bonds form when two atoms have similar yet not identical electronegativity values (e.g., H2O, HCl, HI). These compounds do dissolve in water and do conduct electricity.

For example, hydrochloric acid (HCl) and hydroiodic acid (HI) are strong acids that completely dissociate into their ions in water. In its pure form, hydroiodic acid is a gas, so it’s fair to say mixing it with water is dissolution.

Water also dissolves itself. At any given time, pure water contains the hydrogen cation (H+), the hydroxide anion (OH–), or the hydronium ion (H3O+). This does not make water a good conductor, but if you push enough electricity through it, it will conduct.

When Hydrogen Acts as a Metal

What do conductive polar covalent compounds have in common? Many of them have hydrogen as the cation (the first symbol in the formula). While hydrogen is often considered to be a nonmetal, its location at the top of the alkali metals group on the periodic table is no accident. The polar covalent bond formed between hydrogen and a nonmetal is very nearly an ionic bond.