Consider a string with a weight tied to the end. Gravity pulls the string down while the string pulls the weight. These two forces are equal and opposite to each other. Together, they cancel each other out. The weight is “at rest” with no net forces acting on it. This state is known as mechanical equilibrium.

Mathematically, this is expressed as

or the sum of all forces acting on a mass is equal to zero. For the weight on a string, the force up is the tension of the string and the force down is the force of gravity pulling the weight. Together, they add up to zero.

A very large cat sits at the center of a swing. Two scales are attached to the ropes. 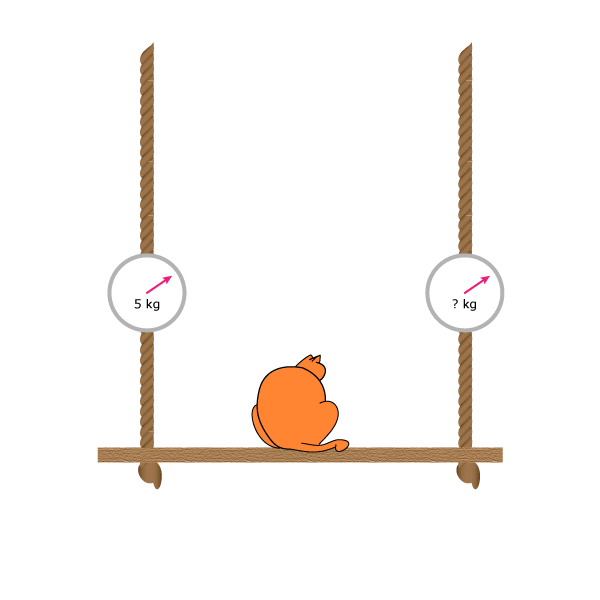 One scale reads 5 kg.
A. What does the second scale read?
B. What is the combined weight of the cat and swing?

The cat in this situation is in mechanical equilibrium. The force of gravity pulls down on the cat and swing. The force up to counteract this pull must equal the force down.

Since the cat is sitting in the center of the swing, the force up is equally distributed between both ropes. Since one scale reads 5 kg, the other rope should carry the same amount of weight. The second scale will read 5 kg.

The weight of the cat and swing will be the sum of these two up forces.

The cat and swing weighs 10 kg.

Let’s look at what happens if the cat scoots to the left a bit. 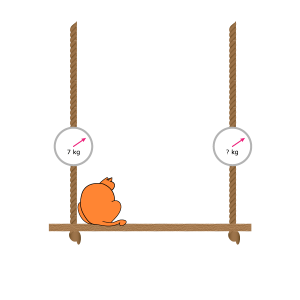 It is important to remember when a system in mechanical equilibrium the total forces acting on the system are equal to zero.