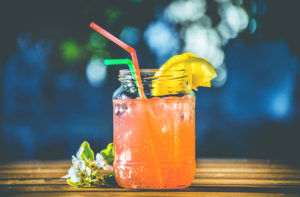 A packet of powdered alcohol rehydrates to form one shot of liquor. It can be mixed in water or non-alcoholic drinks. (Lisa Fotios)

You may not have heard much about powdered alcohol until recently, but General Foods filed the patent for a process to make it way back in 1972.Powdered alcohol is a dehydrated form of ethanol or grain alcohol that mixes with water to produce an alcoholic beverage. Its made by combining alcohol with cyclodextrin, the same carbohydrate molecule used to make Febreze. Cyclodextrin molecules can absorb around 60% of their weight in alcohol. The alcohol-saturated carbohydrates appear as a powder, so alcohol is easier to transport. The molecules release alcohol in water.Powdered alcohol has been available on the internet and in certain European countries for a while, but it is unavailable in the United States or United Kingdom. In the US, the product would fall under the jurisdiction of the Alcohol and Tobacco Tax and Trade Bureau (TTB). Although the TTB approved Lipsmark LLC’s product named Palcohol on April 8, 2014, problems with labeling and controversy over the product led to revocation of approval on April 21st of the same year.

Make Your Own Powdered Alcohol

For do-it-yourself types, it’s worth taking a look at the patent. It appears it’s fairly easy to make powdered alcohol using high-purity ethanol and a high surface area carbohydrate. The problem, from a marketing perspective, was getting a powder that wouldn’t take sweet and would dissolve to produce a colorless, low-viscosity liquid. If you’re looking to make your own powdered alcohol and don’t mind a sugary taste and a bit of cloudiness, you shouldn’t have any trouble making it yourself using pure or nearly pure ethanol and the carbohydrate of your choice. Dextrin would be a good starting point for experimentation. One reader reports success using food grade tapioca maltodextrin (e.g., N-Zorbit) and high-proof alcohol.