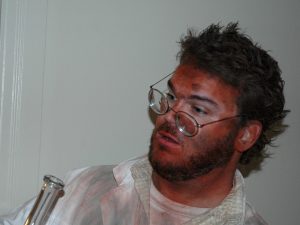 Do you have any lab accident horror stories? (Clinton Steeds)

Do you have any tales to tell of lab experiments gone very wrong or lab accidents you have witnessed? What is the most dangerous thing you have ever seen someone do in a lab? Here’s your chance to tell the tale.

A Freshman in Regents Chem

I was cleaning the beakers out in the sink because my lab partner refused to do any of the work in the experiment or in cleaning up. She even had the nerve to comment on my handwriting when she was copying off of me. So I was stuck cleaning the glassware, shaking the beaker to be rid of the last drops of water, when it accidentally slipped out of my hand and smashed onto the table where she was sitting. She had a minuscule splinter in her pinky. No one but me was sorry.
—futurdujour

Once upon a time in my chemistry class, one mate sipped dilute sodium hydroxide out of a pipette during titration lessons. Our chemistry tutor took his time to teach the entire class how to use the pipette.
— Mariam Tahiru

My science teacher made this blue spiral thing in a old pyrex beaker he didnt tell everyone to were goggles instead he told them to get closer to the beaker and suddenley BANG!! the beacker exploded glass everywhere luckily no one was harmed
— Bradley

Me and my mate were doing an experiment and she knocked some acid ova. It went all ova my arm now I’ve got a big scar.
— lola

My Cousins chemistry teacher once did an experiment but he did it wrong and the windows and skylight flew out but thankfully, the students had taken refuge outside before it happened. He still hasn’t told me how he did it!
— hydrochloricacid200

One of my college friends was playing with rubbing alcohol, tracing out patterns on the lab table. Then she would set one end alight to watch the pretty blue flame trace out the alcohol path. If small doodles are fun, what about large ones? My friend came up with a grand plan and enlisted another friend to go out into the hallway with the alcohol bottle and lighter. A couple minutes later, a loud ‘wuff’ noise and orange glow appeared through the door followed by the sound of ‘Uh oh!’ I learned how to properly use a fire extinguisher and managed to clean up enough where the only evidence of the experiment was a pattern of missing floor wax on the linoleum.
—Phoozang

I had a horrible chemistry teacher in highschool. He gave us mystery acids and bases to identify as either acids or bases. The only thing he told us about getting them on our skin was to flush them with water….(btw no gloves involved). So a big pile of Sodium Hydroxide (as I later identified) dumps on the back of my hand. I freak out, and run to the sink but before I do anything I ask my teacher, “What am I supposed to do? What am I supposed to do?” He just asked what it was, and I said I didn’t know, (unlabeled mysteries) and he just scoffed at me like I was an idiot. Well turns out I was because I shoved my hand under the water. Bam! Base burn.
— ash

One of these guys I was working with decided he would stick a pipette full of benzene up his rectum to determine whether or not – “Benzene is harmful” – now he is lying in hospital with half his ass burnt off.
— Huberto

So a friend was in the lab using dry ice to cool isopropanol to dip a rotary vap into. But, as it was approaching 5 – and there was no real rush on this experiment. She figured she might as well just clean up and go home. So… Washed the glass, put away all reagents, scrubbed up, but didnt want to waste the 10lbs of good dry ice. Sooooo… She figured it wouldnt melt away in the fridge! Better yet, there was a really cold one with a locking door. Sometime during the night, the pressure built, and the door was blown 30 feet away in the lab next door – through the cinder block wall, leaving a 3 foot wide, 8 foot tall hole. Thank god no one was around.
—Eeek100

we were drinkig cocoa in my science teachers class and this kid wasnt paying attention and his cocoa spilled on his leg,my teacher sent him up to the office cause his leg was bright red. the cocoa was boiling hot !!!
— noodlez

This wasn’t caused or even witnessed by myself but has become almost lab folk-lore. A standard set up in my lab is a sintered funnel connected to a large 1L round bottomed flask via a three way tap to allowing bubbling with nitrogen to wash compounds and subsequently drying the compound using vacuum. One PhD student turned the tap the wrong way so as opposed to the nitrogen going up through the funnel it filled the round bottomed flask which subsequently exploded, causing a mixture of various solvents such as DCM, DMF and diethyl ether to go flying along with shards of glass! This was in the fume hood but the sliding door was only partially closed. Luckily he was wearing safety glasses, as he did get solvent in the face and a few minor cuts from flying glass. He was nicknamed ‘Sean the bomb’ after that.
— kuso482

Girl, watch what you doing!

I was a freshmen in my high advanced science class. We were doing an experiment, while this girl and her friends were playing with the test tubes. To make a long story short one of the girls only had 1 eye at the end of the day. (Nasty sight)
—Kesha.Singleton

Just like what went wrong with apollo 13, half a dozen mistakes years before….I was making a sub component of HEMO. reagent. No warning in documentation , reagent solutions. Label 40X phosphate buffer. Not mention was 40 X kcn(of final reagent) 1 gallon cubitainer filled 10 percent, 6 month old , hot lab. I opened it a suprise. MY vision became tubular, hearing distortions. In short I was shutiing down. Anecdote poss. more dangerous then HCN. Kept calm breathe deep and regular. Made it. I knew all the details on what was going. princeton hospital asked HR for me to give the anecdote info.. Amazing. Our general manger( best organic chemist i ever knew)calculated what i took. +/- ld 50 mouse pop inhation route. Just a tech. out of school–but within a year they gave ne the production Lab, and know one was ever exposed again. Made sure of that.
— jerry

One of my idiotic friend had mixed up bottles of water and hydrochloric, accidentally he put water into the acid which caused a great explosion and burnt his whole face
— What an ididot

Once after the lab floor was cleaned, my friend and I started an experiment. He cut a small piece of sodium which by mistake fell down on the wet floor! We saved our heads by running out fast and the lab was safe because the piece was too small.
— Rohit

it was our term exams and everyone was in a hurry to finish. one girl thought that she could speeden things up by evaporating ether solution on the burner. there was a terrible blast and she was hurt. Luckily no one was nearby, reenfforcing the need for proper lab safety and adult supervision
— chiba

I did a stupid thing

I was in a hurry one night in the bio-chem lab and mouth pipetted ether. Well, I came to in mess of glass and liquids,feeling very sick but otherwise unhurt. My results I was in such a hurry to obtain were delayed for another two hours. Don’t suck stuff up with your mouth in a lab, ever!
— Vee

We were at the lab, and we had to put a blue liquid in a Becker, to do something else…We were using that kind of pipettes that you use the mouth to pick up the liquid, some classmates were trying to “put” that liquid near the mouth, and one of them said, you need to “pull” the liquid more… and then he pulled, and he “drank” a lot of the blue liquid, and the teacher then said that the liquid was a strong ‘laxative’ . That’s not a lab accident, of course, but … 🙂
— Gabs

I took over a lab that had been run in a very lax manner. My first day as lab manager, I just observed how things were being run to get an idea of where corrections needed to be made. I was shocked and afraid when I saw a tech pick up a squirt bottle of methanol and saturate a filter that was about to go into the drying oven. I stopped him and was informed that ALL the squirt bottles contained di-water, regardless of how they were marked. We corrected that and put the right chemicals in the right bottles. Later, I found a tech adding acetone to an analysts, perplexed as to why it wasn’t working right. He had forgotten that the acetone bottle ACTUALLY held acetone and not di-water!
—Wildpoodle

I got a nice burn when I grabbed a beaker my lab partner recently used to boil off the excess liquid from our experiment in our Chemistry class.
— Sore Fingers

Upon starting my first job, I was discussing lab safety with my new supervisor. I stated that I had once cut my palm with a broken glass tube when trying to force it into a rubber stopper. My new suervisor then showed me his palm. We had identical scars in the middle of the palms of our right hands.
— Eric