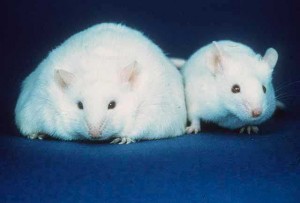 Pair of laboratory mice. The left hand mouse is significantly fatter than the mouse on the right. High cholesterol levels are often linked to obesity. Credit: Oak Ridge National Laboratory

Atherosclerosis is a medical condition where fatty materials, such as cholesterol, build up on the walls of blood vessels. Arteries begin to stiffen and narrow, reducing blood flow and increasing blood pressure. This the main cause of heart attacks and strokes and one of the leading causes of death in humans.

Scientists at Johns Hopkins identified a glycosphingolipid molecule (GSL) as the main culprit responsible for atherosclerosis. GSL is found in the membranes of all cells and is responsible for regulating cell growth. Turns out, it also has role in the regulation of the way our bodies utilize, transport and purge cholesterol.

A series of experiments using mice and rabbits found that when GSL synthesis is blocked using a compound called D-PDMP (D-threo-1-Phenyl-2-Decanoylamino-3-Morpholino-1-Propanol):

The first experiment used mice genetically predisposed to atherosclerosis and fed a high fat, cholesterol packed diet. This would practically guarantee the mice would develop the disease. One third of the animals were given a low dose of a drug containing D-PDMP. A second third received a double dose of the drug and the last group received a placebo.

After several months of this diet, the aortas of the mice were measured. The placebo group developed thick buildups of fat typical of atherosclerosis. The low-dose group aortas had significantly fewer fat deposits and the high-dose group had aortas that were virtually clear of any fat buildup. Scientists also monitored blood flow in the mice and found the D-PDMP groups had normal blood flow and the placebo group had reduced blood flow. Examination of the livers showed the dosed mice had increased levels of the enzymes responsible for maintaining the balance and purging of fats in the body.

While this is great news for mice and bunnies, it remains to be seen if the same is true for humans. Human testing is a logical next step. If it works, it could help the many people who run the risk of high cholesterol.

These experiments are reported online on April 7, 2014 in the American Heart Association journal Circulation.