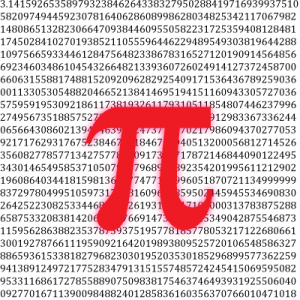 March 14 is traditionally Pi Day since 3-14 are the first three digits of pi. The year 2015 added little more significance because the next two digits are 15. The year 2016 worked too, since you could round pi to 3.1416.

Anyway, the digits of pi are important. That hasn’t stopped people from trying to change them. Here is the story of the infamous Indiana pi bill:

The story begins with the age old geometry problem known as “squaring the circle”. The goal of the exercise was to produce a square with the same area as a circle using only a compass and straight edge. A circle with 1 unit radius has an area equal to π. If you could produce a square from that circle, you could find a whole number ratio of the between the radius of the circle and the length of the square’s edge and in turn, find a whole number ratio expressing the value of π. This task was eventually proven to be impossible in 1882 by German mathematician Ferdinand von Lindemann. Now, the term ‘squaring the circle’ is used to denote taking on any impossible task.

Just because another mathematician shows something is impossible did not deter amateur mathematician Dr. Edward J. Goodwin of Indiana. He continued the search until he believed he had solved what all other mathematicians could not. He squared the circle. Now he had to capitalize his discovery. Dr. Goodwin approached his local state legislator, Taylor I. Record with a deal. Dr. Goodwin would allow the State of Indiana free use of his discovery, while the rest of the world would have to pay a royalty. All Indiana would have to do is acknowledge Goodwin’s discovery.

Representative Taylor introduced HB 247 (click here to see the full text of HB 247) to the Indiana legislature on January 18, 1897. This bill outlined the generous deal proposed by Dr. Goodwin and cited his other mathematical accomplishments such as trisecting an angle (another impossible geometric task) and duplication of a cube published in the journal American Mathematical Monthly. If anyone checked up on this claim, they would have found the articles contained a disclaimer by the editors stating these articles were published at the request of the author. The bill also includes the statement: “the ratio of the diameter and circumference is as five-fourths to four.” We know from Geometry class that the ratio between the diameter and circumference of a circle is π. Thanks to Dr. Goodwin, this ratio is calculated by dividing 4 by 4/5 to get π. Do this, and find π = 3.2.

The bill was passed to other committees for review and the House education committee approved the bill saying the reasoning was sound. On February 5, the Indiana State House of Representatives passed the bill 67-0.

Professor Clarence Waldo of Purdue University was listening in on the debate. Dr Waldo was in town securing funds for the Indiana Academy of Science. When he heard the legislation was debating mathematics, he wanted to attend. After the debate a representative offered to introduce Dr. Goodwin to him. He declined saying he had met as many crazy people as he cared to. Dr. Waldo began ‘coaching’ (his term) Indiana State senators in geometry and the measurement of pi. His coaching paid off when the Bill reached the Senate floor on February 12 when the Senators made jokes and ridiculed the House. The Senate voted to postpone the bill indefinitely and effectively killed HB 247.

This Pi Day, thank Dr. Clarence Waldo for his contribution to Pi folklore. He saved us all from celebrating Pi day on March 2.

One thought on “Pi Day and the Indiana Pi Bill”