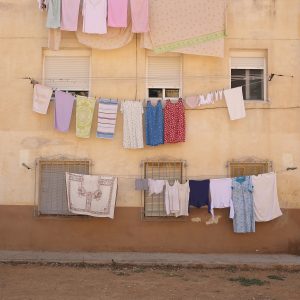 Washing clothes could spread a contaminant to other parts of the item or throughout the load. (schermpeter42)

Have you ever wondered whether washing clothes may make them dirtier rather than cleaner? Here’s an interesting e-mail I received:

“I am hoping you may be able to answer a question that seems to have everyone staring into space. It appears we are all focused on what pollutants are in the air, water and soil but no one seems to know what happens to them when they come into contact with our clothing.

Living in a area where coal burning is still common practise for domestic heat and power generation, it is quite common for clothing to be exposed to various levels of coal soot and its byproducts on a daily basis. (just a note we burn oil but have many neighbours that burn coal and one of the power plants is 2 miles away) Seeing soot on the cars etc. is part of daily living. We always assumed once our clothes were machine washed with a brand name detergent any soot contamination would be removed. However approximately 15 months ago a family member became ill and it was determined PAH or heavy metal exposure was a contributing factor. Since this individual worked in an office environment as did the rest of the family we frantically searched for the potential source and had various tests completed.

To our surprise we found various trace heavy metals and PAH evidence still present in freshly washed clothes, which was shocking, and the urine analysis for heavy metals on all three family members followed the same pattern, including a 13 year old. All clothes were also machine dried indoors. It appeared Sulphur, Barium, Beryllium, Thallium, Uranium, Magnesium, Strontium and Nickel for example were in the clothes after washing and also over the normal ranges in our bodies. Yet lead, mercury, etc were all perfect. We did not have the resources to do any extensive testing on PAHs but did find I thought it was naphthalene but it is actually the one that produces 1-oh-pyrene in urine (benzene). I could not afford to have any further testing completed.

My question is has anyone completed any detailed testing in this area after removal of the tri sodium phosphates from the detergents to ensure no traces of PAH or heavy metals were being left behind? The detergent manufactures will not give anything other than a generic answer and I have tried them all. There are thousands of individuals that work in various heavy industries that are exposed to PAH’s and heavy metals daily, those on the street levels of the larger cities, etc. who like us wash our clothes in the household machine assuming all of these potential toxins are being removed. But are they really or are we wearing a toxic patch?

From your experiences with PAHs / heavy metals over the years how would you say they should behave when on clothing and are exposed to a machine wash and modern detergent. Would they stay in place since they do not dissolve in water, would they eventually break down on the clothing even though they are not being exposed to direct sunlight or microorganisms in soil? Would they ever break down in an indoor environment? Do they just sit there on the clothes until we eventually come into contact with them and absorb them?”

A few weeks ago one of my family members left a mercury thermometer in his pocket, which subsequently broke in the washing machine. Mercury metal is pretty easy to see, so it was apparent that the mercury spread and contaminated all the clothing, and I would think also contaminated the washing machine, though I think an EDTA solution or another ligand could be used to remove it from the appliance. I discarded all the clothes.

In another instance, I knew someone who worked in the seal-coating industry. His wife couldn’t wash his clothes with anyone else’s because the clothes acquired the sealant/tar smell (in the dryer, the sealant melted and spread). If there was removal of the organic compounds, it was incomplete. Basically washing/drying took out perspiration and normal soiling.

So, in my opinion, heavy metals are not removed by normal washing. Detergents and enzymes, after all, are meant to remove organic soiling. Polycyclic aromatic hydrocarbon (PAH) levels are probably diminished through normal washing/drying, but there is no reason to believe heavy metal levels would be lowered. If the same clothes are worn to the workplace, I would expect them to pick up more contamination. Further, washing contaminated clothes with clothes from other family members would spread the metals.

To summarize, I would not expect washing/drying to remove metals. I would expect the contamination to spread across the entire load of laundry and to accumulate over time. There might be a PAH reduction, but not a complete removal.

Do you have any experiences with laundry contamination or information about the effectiveness of washing for removing metals and PAHs?

One thought on “Washing Clothes May Make Them Dirtier”