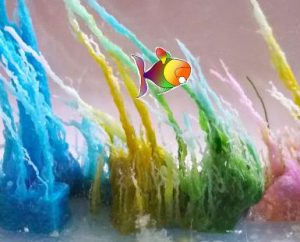 Fish can’t live with Magic Rocks because the metal salts from the crystals get into the water and poison them.

One surprisingly common question I get is whether it’s okay to put fish in a Magic Rocks aquarium. The short answer is no, definitely not!

For those who don’t know, Magic Rocks are a science project in which you take a packet of special rocks, pour a “magic” solution over them, and watch the rocks grow into fanciful shapes. The rocks start growing immediately, resulting in a complete coral-like aquarium in a single day. Once the rocks are done growing, you pour off the solution and replace it with tap water. It’s tempting to put fish in the beautiful display after you replace the solution with water, but it will kill your fish. Further, you should never grow Magic Rocks in a fishbowl you ever want to use for fish because the chemicals will attach to the glass or plastic and basically make it toxic to all aquatic life.

There’s a huge warning on the solution packet that says you can’t touch it. It’s a sodium silicate or water glass solution, which isn’t going to eat your skin off or anything, but will harden into silica (like silica gel packets that come with shoes and electronics).

If you get it on your skin or clothes, it has to wear off rather than wash off. It’s best to heed the instructions. But, the residual silicate solution isn’t the real danger to fish.

The problem is the rocks themselves. The rocks are small chunks of metal salts that react with the water glass to form metal oxides. When you pour off the solution and add fresh water, some metal will inevitably leach into the water. The metals may help keep algae from growing in the tank, but they’ll eventually kill your goldfish or betta. Other fish, less tolerant of pollutants, may die almost immediately.

Modern Magic Rocks are much less toxic than the original form of the toy, plus many kits come with their own plastic aquarium and background stickers to resemble fish or planets or aliens or pretty much anything you want. You can keep a Magic Rocks aquarium, adding fresh water as it evaporates, for several weeks. Eventually the colored towers will topple. When this happens, the best thing to do is just throw the container away. It isn’t particularly safe for any further use.

If you’re unfamiliar with Magic Rocks, here’s a time lapse video that shows their growth. Once the rocks have grown, you replace the solution with regular tap water. A fish probably wouldn’t die instantly in this water, but over time toxic metals would leach into the water.