Home » Science Notes Posts » Biochemistry » Where Does Fat Go When You Lose Weight? 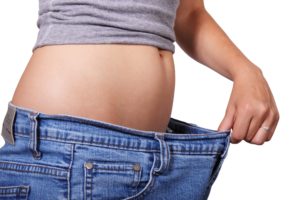 Where does fat go when you lose weight? Mostly you breathe it out!

When you lose weight, fat doesn’t magically vanish or convert into muscle or even energy. Your digestive system does not excrete it in feces. In a survey of 150 health professionals (dieticians, doctors, personal trainers), 98% didn’t understand fat metabolism. Only three people in the study knew where fat went!

Where Does Fat Go?

When you burn fat, your body performs a chemical reaction, breaking fat into smaller molecules and releasing energy. However, it’s incorrect to say the fat (matter) is converted into energy, just like you can’t say burning a candle turns the wax into energy. Burning fat is much the same as burning a candle. It’s an oxidation or combustion reaction that can be written as a balanced chemical equation:

Fat reacts with oxygen to form carbon dioxide and water. Energy is released in the form of heat. Fat can’t just turn into energy because of the physical law of Conservation of Mass. It doesn’t turn into muscle because carbohydrates aren’t directly converted into proteins.

To burn 10 kg of fat, you need to inhale 29 kg of oxygen and release 28 kg of carbon dioxide and 11 kg of water. Your body excretes carbon dioxide a few different ways, but the bulk of it is simply exhaled. Basically, you breathe out burned fat. The water is either absorbed for use in other biochemical reactions or is excreted via perspiration, exhalation, or urination if you’re hydrated.

Unfortunately, you can’t just breathe more to rid yourself of excess weight. All you’ll get is a nice case of hyperventilation! Your body has to unlock the carbon contained within fat cells in order to release it. This only happens when you need more energy than the food you eat can supply. You have to increase your metabolism (exercise or at least move around more) and/or intake fewer calories. You can lose weight (not fat) other ways. For example, if you’re dehydrated you weigh less because your body isn’t as full of water as it could be.

While you can burn fat, the number of fat cells (adipocytes) in your body doesn’t change. Sadly, they don’t die and go away. You can think of adipocytes as tiny balloon-like fat storehouses. When you burn fat, the cells shrink. When you gain fat, they swell.