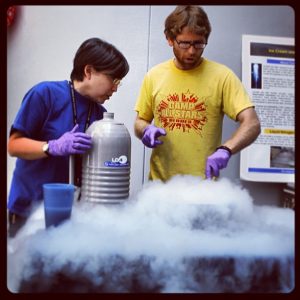 Liquid nitrogen boils at room temperature. If you microwave it, it’s already boiling, so nothing much happens. (NASA Goddard)

Have you ever wondered what would happen if you microwaved liquid nitrogen? Here’s the answer to the question and an explanation of what’s going on.

If you nuke water in a microwave, it gets hotter. If you microwave liquid nitrogen, nothing happens. The liquid nitrogen keeps boiling off, but at the same rate as if you had it sitting on the counter.

Water molecules are polar, which makes them able to absorb microwave energy. Each water molecule has a positive end and a negative end, making it responsive to electromagnetic fields, such as the one produced by the magnetron of a microwave. The molecules vibrate and move further apart, eventually boiling into the gas phase.

Nitrogen molecules are linear nonpolar N2 molecules. Because they don’t exhibit polarity, the microwaves don’t react with them. Microwaves pass through liquid nitrogen as if it wasn’t even there.

Dry Ice in a Microwave

Now you know what happens to liquid nitrogen. Can you guess whether dry ice reacts the same way in a microwave?