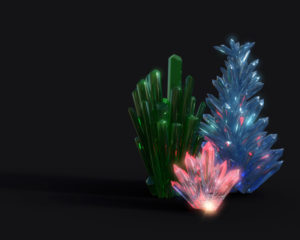 If you think regular crystals are boring, try growing glow in the dark crystals. These magical creations are easy to make, but you need to apply a bit of science to get them to work.

Why Glow in the Dark Crystal Kits Don’t Work

If you’ve purchased glow in the dark crystal kits, most likely (based on the negative reviews), you’ve been disappointed. Even though the kits are expensive (about $10), they don’t include great ingredients. You pay for packaging, advertising, chemicals, “free” fluorite, and product development. When you buy a kit, you may get too little or low quality glow chemicals and poor-to-wrong instructions.

While the chemicals used to grow crystals are inexpensive, the ones added to make them glow in the dark are not. Worse, they don’t play well with water. What do you dissolve the crystal powder in to grow the crystals? You guessed it — water!

The other problem is the compounds that make something really glow in the dark (phosphorescence) are contaminants to crystals. Crystallization is one form of purification, typically excluding most contaminants. If you put glow powder in a crystal solution, some of the “glow” may stick to the outside of the crystal, maybe a tiny amount even gets incorporated into the crystal, and most of it gets washed down the drain. The crystal may glow, but the light will be so dim it will be hard to see. The kind of crystal that glows under a black light (fluorescent) often work better because you don’t need to get as much of the chemical into the crystal. A black light supplies the energy to produce light.

How to Get Crystals to Glow

How do you overcome these problems? The crystal kits that work give you a phosphorescent “rock” base on which to grow the crystals. Usually the crystal powder produces a clear solution because any color in the crystals diminishes the glow. Also, coloring the crystals makes it harder to charge the glow powder. Phosphorescent molecules need energy, preferably from the Sun or a black light. They absorb this energy and slowly release it in the visible range (glow in the dark).

Basically, the crystals grow over a glow-in-the-dark base.

Grow Glow in the Dark Crystals 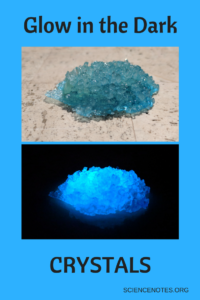 These are sugar crystals that glow in the dark. I colored the crystals using food coloring. These are non-toxic!

Now you know why kits don’t usually work well and how not to grow a glowing crystal. You’re ready for success growing crystals that do glow. You can use any crystal-growing recipe. Good options include ammonium phosphate (stuff in the kits), alum (sold with cooking spices, but expensive), borax (inexpensive; sold as a laundry booster or insecticide), sugar, salt, or Epsom salt (inexpensive; sold in pharmacies).

You are going to grow the crystals around the glowing base. You can color your crystals, but remember: the deeper the color, the dimmer the glow! To get a good glow, use a brightly phosphorescent object. I used a glow-in-the-dark plastic rock.

If all of this sounds like too much work or you have a pretty crystal you’d like to make glow, you can simply paint the base of the crystal with phosphorescent paint, glue, etc. This works best with a clear or at least translucent crystal. You don’t have to paint the entire surface because the light will travel outward to illuminate the crystal.

How Long Do the Crystals Glow?

Phosphorescent (glow-in-the-dark) compounds need to be charged by light in order to glow. The Sun or an ultraviolet light will give you the most bang for your buck, although normal indoor light and cell phone flashlights are enough to produce a glow. The glow doesn’t last forever, unless you keep a black light on the crystal. How long the glow lasts depends on the pigment that was used. Usually, you can predict brightness and glow time based on glow color:

The size of the particles also matters. Bigger glowing particles hold a charge better than finely ground pigment. So, before you go to all the trouble of coating a plastic glowing star or a glowing glass marble, make sure you’re happy with the color, brightness, and longevity of the glow.

Personally, I like to make my own “rocks” by encasing glowing sand in resin. That way I can control the brightness and color. You can use whatever is handy or make your own rocks.